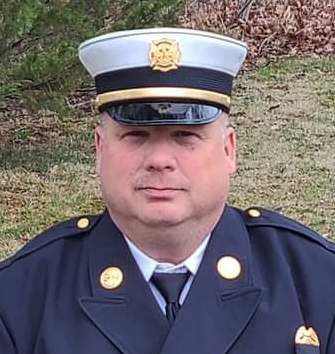 Donald K. Leeman Jr., 55, of Bremen, passed away unexpectedly on the morning of Sept. 17, 2022. He was born on July 26, 1967 in Damariscotta, the son of Donald and Marilyn Leeman of Bristol. After graduating from Lincoln Academy in 1985, he enlisted in the U.S. Marine Corps and served in the Gulf War.

Upon returning to Maine in the early 1990s, Donnie volunteered in numerous places, one being Central Lincoln County Ambulance Service, where he met his wife of almost 20 years, Liz. Within a couple of years, they welcomed their son, Ben.

One of his greatest joys was being a volunteer firefighter for numerous departments within Lincoln County. He held many ranks, but had the ultimate honor of being asked to become the chief of Bremen Volunteer Fire Department.

Donnie was a family man. He enjoyed traveling with his family and hunting and fishing with Ben. He loved it when Ben would out fish and hunt him. He was most proud of all of Ben’s accomplishments, the most recent being Ben’s decision to become a soldier in the U.S. Army and serve his country.

Donnie was preceded in death by his mother, Marilyn Leeman.

He is survived by his loving wife, Liz, and son, Ben, of Bremen; his father, Donald Leeman Sr., of Round Pond; a brother, Martin Leeman and wife, Jennifer, of Bristol; a brother, Daryl Leeman and his wife, Adrienne, of Jefferson; brother-in-law, Sean Welton and his wife, Trico, of West Chapel, Fla.; nephews, Cody Leeman, of Bristol, Kalen and Kendall Welton, of Florida, Jacob Welton, of Georgia, and Tristan and Andrew Leeman, of Jefferson; nieces, Brianna, Jasmine and Amarrie Welton, of Florida, and Ashley Draeger, of Arkansas; as well as numerous cousins.

Relatives and friends are invited to join the family for a memorial service to celebrate Donnie’s life, 11 a.m. on Saturday, Oct. 1 in the gymnasium of Lincoln Academy, 81 Academy Hill Road, Newcastle.