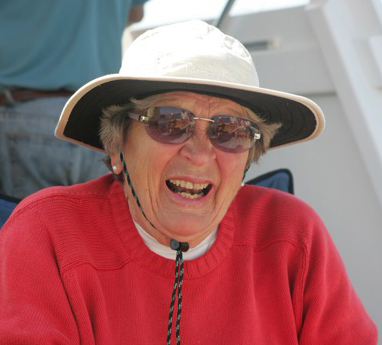 Dorothea “Pat” Brown, 84, summer resident of South Bristol, passed away on Dec. 10 surrounded by 19 members of her adoring family.

She was born July 2, 1932 in DeKalb, Ill. as Dorothea Hills Elmer to Dr. Rev. Franklin D. Elmer and Margaret Nelson Elmer. Her father’s occupation as a minister resulted in the family move to Lockport, N.Y. and then to Flint, Mich.

At age 16, after two years of high school, Pat was invited to enter the Robert Maynard Hutchinson program at the University of Chicago where she graduated in four years. Her family spent summers on the coast of Maine in South Bristol as a young girl, specifically McFarland’s Cove. It was there that she met David Manchester Brown whom she married years later at the age of 19 during her senior year at the University of Chicago. They began their married life in the Chicagoland area and gave birth to three sons, David Manchester Brown Jr., Franklin Elmer Brown and George Jarvis Brown.

In 1963 they moved to Weston, Conn. and shortly thereafter gave birth to their fourth child, daughter Margaret Nelson Brown. In Weston, Pat immediately became involved in the creation of the Norfield Nursery School, where she spent the next 45 years as the music teacher becoming affectionately known as Mrs. Music Brown. With her warm smile and gentle way, she nurtured the children with music and puppeteering, teaching life lessons of kindness and understanding.

She was a founding member of local Chapter P of P.E.O., an international women’s organization and served as state president in 1991 leading with the theme of “How does your garden grow?” which was an overriding life theme within the family.

Pat was an active member of the Norfield Church for 53 years as a Sunday school teacher, volunteer in the annual fair, the music program, handbell choir, and as a patron for the many international mission trips.

Pat and her husband were founding members of the Aspetuck Valley Country Club in Weston.

Her family moved to the Philippines for two years for her husband’s work. The time abroad spurred her early interest to experience the world and its cultures. With her husband and family, she reached all of the Earth’s continents. Pat, a WAVUS summer counselor, in 1948, spent every summer enjoying the coast of Maine and the “healing waters” of McFarland’s Cove as did her parents who retired there.

The family boat, TODARO, locally built by John’s Bay Boatyard, brought Pat much joy. John’s Bay and McFarland’s Cove was her cherished place to soak in the beauty of the ocean, sun, moon and stars. The family cottage and surrounding property allowed her to cultivate her interest in gardening. She welcomed family and friends to sit with her on the front porch of the cottage, and many came from near and far to see her. For years she was known as Ma Brown, to her grandchildren she was Gramsie. Pat was loved by a large family and many friends for her unassuming, caring and positive ways.

She is predeceased by her husband of 49 years, David Brown.

In lieu of flowers, donations may be lovingly made to the Norfield Children’s Center or Norfield Church Music Program, in memory of Dorothea ‘Pat’ Brown, 64 Norfield Rd., Weston, CT 06883.