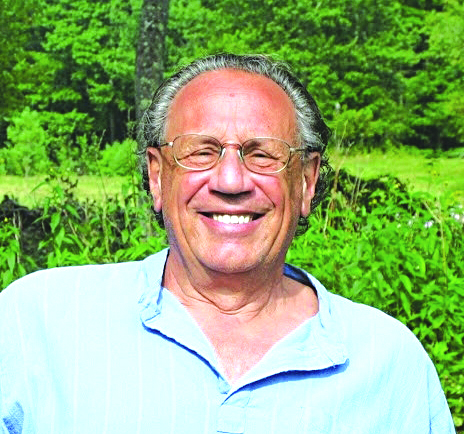 Dr. Jim Maxmin died unexpectedly on Jan. 25 near his home, Lakefield Farm, in Nobleboro. He was the beloved father of Jake and Chloe Maxmin, of Nobleboro, and Ben, Jon, Peter, and Kate Maxmin of London, England. He is also survived by his loving wife, Shoshana Zuboff of Nobleboro, and his eight grandchildren in London, each of whom he cherished deeply.

Jim Maxmin was a man for all seasons: a business visionary who chose, with Shoshana, to raise their two babies on a farm in Nobleboro; a citizen of the world whose preferred destination was the North Woods of Maine in dead of winter on a snowmobile or a quiet cove of Lake Damariscotta in his fishing boat, waiting patiently for that elusive giant bass as he watched a pink and golden sky give way to late summer dusk; a Ph.D. in Philosophy whose preferred reading was BASS Times and American Snowmobiler; an intellectual who mastered stone wall building and created magnificent gardens and walls at his home on the lake; a businessman who dreaded having to wear a tie and raced through power breakfasts at Claridges in London so that he might end the day tucked into a booth at Moody’s Diner with his family. What he loved above all else: Shoshana, his children and grandchildren, Pachi, the family “dog,” friends and neighbors, the young people he mentored, the family farm, the town of Nobleboro, and the state of Maine.

Born outside Philadelphia in 1942, Jim Maxmin attended Grinnell College on a swimming scholarship, where he set many new collegiate records especially in the breaststroke. He completed college in three years and moved on to Fitzwilliam College, Cambridge University where he received his Masters Degree and BA in Philosophy. He studied logical philosophy and the philosophy of religion at Kings College, University of London, where he received his Ph.D. in 1969.

In a surprise ending, Maxmin decided not to pursue an academic career. Instead, diploma in hand, he joined Unilever Ltd. as a management trainee with Lever Brothers. During his first year, he sold soap door to door in the rough and tumble neighborhoods of East London, an experience he credited as the origin of his formidable skills in marketing and sales. Thus began a distinguished business career, during which he led major international companies and developed a reputation as a visionary CEO.

In 1972 he joined Lex Service Group PLC as a strategic planner. He was appointed Marketing Director of Volvo UK in 1973. He became CEO of Volvo in 1974 and Joint Chairman in 1975. At Volvo he was responsible for growing the business from 16,000 units p.a. to over 70,000 by 1980. Under his leadership Volvo UK adopted a radical consumer focus and became the most profitable operation in the world for the Volvo brand.

Maxmin joined the British conglomerate Thorn EMI in 1981 and became the Chairman and CEO of Thorn Home Electronics International. He grew its rental and retail businesses into a 2.5 billion company with 26,000 employees operating in 51 countries. At Thorn, Maxmin became known as a skilled innovator, leveraging new technologies and egalitarian forms of organization to operate a fast-moving global business with only a small management team famously located over a grocery store in a village outside of London. He bucked the trends of the 1980s by investing substantially in employee education and training. His charismatic leadership was frequently celebrated in the business press for its unique blend of social values, financial results, and visionary innovation.

In 1991, Maxmin became the CEO of Laura Ashley Holdings PLC, when the company was near bankruptcy. Maxmin introduced new technologies and reorganized the company, eliminating five layers of management. He developed an historic strategic alliance with Federal Express designed to integrate and streamline Laura Ashley’s worldwide supply chain. Documented by many business scholars, those innovations became the standard for global supply chain innovation during the following decades. Maxmin returned the company to profitability, positive cash flow, and growth within two years. In 1994 the Ashley family, still majority shareholders, voted to slash internal investments in order to boost short term profit-taking. In a highly publicized conflict, Maxmin refused to comply, choosing to resign from the company rather than destroy all that he and his colleagues had worked to build.

Maxmin also brought his talents to many other companies as a board member and advisor. He was a non-executive director of Progressive Insurance, British Airports Authority PLC, Geest PLC, Scottish and Provident Assurance, and Dawson International PLC. In 1995 Maxmin founded Informate Associates, a boutique consultancy, and Global Brand Development, a private investment company.

Jim Maxmin devoted the second half of his life to conceptualizing business innovation, advising entrepreneurs, and mentoring young people. In 2002 he wrote the highly acclaimed book, The Support Economy: Why Corporations Are Failing Individuals and the Next Episode of Capitalism, co-authored with his wife, Harvard Business School Professor Shoshana Zuboff.

He worked closely with business innovators around the world, advising on the creation of radical new business models that leverage technology and social networks to address chronic social challenges from active aging and elder care to diabetes, obesity, smoking cessation, and social housing. He also worked with many members of the Blair and Brown administrations on the citizen-focused redesign of public services in the UK.

In 2010 Jim Maxmin became a Distinguished Scholar at the Massachusetts Institute of Technology, where he worked with young entrepreneurs committed to developing businesses for the social good. In 2013, he founded The Demeter Entrepreneurs Support Network. Its mission is to provide ongoing personal, business, and technical support to young entrepreneurs from low-income countries. These young people are educated in the U.S. but choose to return home to develop businesses aimed at solving some of the most intractable problems of their societies. The Demeter approach was intended as a counterclaim to the harsh sink-or swim-ethos of startup culture. The approach instead is one of hands-on counseling, nurturing, and support for the entrepreneur as a human being as well as a businessperson. Demeter attracted an astonishing array of talented young people along with many highly skilled advisors from around the world, each intent on contributing to a new model of breakthrough entrepreneurship. By 2016 Demeter was operating in 12 countries with a network of over 130 members.

The highlight of the last decades of Jim Maxmin’s life was the home that he and Shoshana created in Maine for their young children, Chloe and Jake. Jim devoted himself to raising his children on a diet of love and fun, whether waterskiing, swimming, and kayaking on the lake, snowmobiling up north, caring for the deer and chickens, reading books, fishing in summer and winter, exploring the coast of Maine, or playing an intense game of chess by the fire. He looked forward to summertime visits from the family in England, whom he visited in the UK throughout the year. In 2009, when lightening destroyed their house, Maxmin dedicated himself heart and soul to rebuilding a home for his family on their treasured farm in Nobleboro.

The mementos strewn about his desk at the time of his death say it all: his passport and lifetime British Airways card, two ticket stubs from Chloe’s college graduation in May 2015, his business card as Chairman of Demeter, his much anticipated lifetime fishing license from the Maine Department of Inland Fisheries and Wildlife, a printout of the airline itinerary for a visit to Washington DC where he planned to spend a February weekend with Jake, a Wall Street Journal article on “the young entrepreneur as an endangered species,” his membership card for the Maine Snowmobile Association, a vivid happy painting from his granddaughter, Anna, depicting “King Jimmy of Love.”

Please share your memories of Jim and pay respects at  www.jimmaxmin.com.