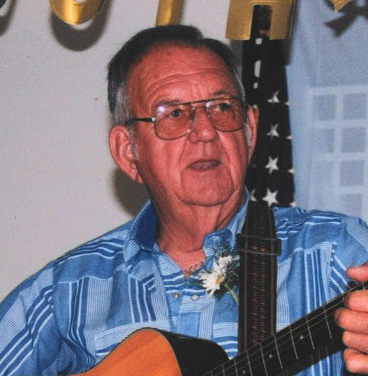 Earl Walter Reynolds Sr., 88, passed away peacefully at his home surrounded by his family on May 7, 2021.

Earl was born on March 14, 1933 in North Waldoboro to George and Edith Reynolds. He graduated from Waldoboro High School in 1950, after which time a chance meeting during a motorcycle ride in Thomaston would lead him to his wife and the love of his life, Louise Spear. Married July 5, 1952, Earl and Louise would go on to have four children, Walter, John, Jeff, and Cindy.

Earl was a lifelong truck driver with a passion for family and farming. He drove a cement truck for Martin Marietta for 25 years, at which time he retired to start his own earthwork and construction business. Some of Earl’s favorite pastimes included camping in Florida for the winters, tractors and farming, raising livestock, and, most of all, spending time with his large, loving family.

Everywhere he went, guitar case in hand, he would entertain, from singing on the radio on WRKD in the ’50s and ’60s, to any of the many birthdays or anniversaries. If Earl was at a party, everyone wanted him singing. Some of his most requested songs were “The Auctioneer” and his talent for yodeling.

He was what all men strive to be, a strong, hardworking, loving, family man. The best “Bampa” a kid could ever have.

A private graveside service will be held at the Shuman Cemetery in Waldoboro.