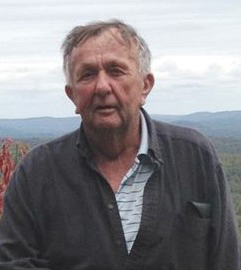 Edward M. Lewis Sr., 76, of Bristol, passed away peacefully at home on Dec. 26, 2016 surrounded by his loving family after beating cancer for six years.

Edward (Ted) was born on Oct. 19, 1940 to William and Iva Lewis of Pemaquid Beach. He attended Bristol School in his early years then graduated from Bristol High School. Ted married the love of his life, Sandra, on April 28, 1962.

Ted was a man of many trades, always working in various jobs such as carpentry, construction, clamming and taking care of people’s properties. He had a love for all animals, especially dogs, and was often accompanied by one throughout the years while out and about in town.

During the summer, Ted could usually be found along Route 130 in New Harbor having one of his frequent yard sales. Another famous trait of Ted was holding up traffic along Route 130. If he was pulling out his driveway, many people knew their ride was about to take an extra 10 minutes.

Ted was a huge family man and loved having parties, celebrations and gathering at his house over the years – he was always the life of the party, telling hilarious jokes and stories that kept everyone laughing.

There will be a private gathering with Ted’s family this spring.