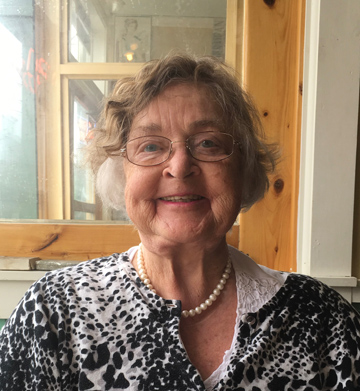 Ella was born in 1934 in Bergen, Norway. She was the middle of five children. Much of her childhood took place during the Nazi occupation of Norway. Her generous spirit was evident from a young age. Although her family had little food to spare, Ella snuck whatever food scraps she had to Allied soldiers imprisoned in a nearby prisoner of war camp.

After high school, she worked as an au pair in London. Her time in the United Kingdom was full of adventures, including hitchhiking across the British Isles and sleeping on the sidewalk for a glimpse at Queen Elizabeth II’s coronation procession in 1953.

Ella returned to Bergen to attend the Haukeland University Hospital nursing school. Following graduation, she worked at the hospital in Bergen for several years. She then returned to London to work at the Kensington Hospital for Children.

Ella landed in the United States somewhat by accident. She came in 1963 to visit her sister, Ingrid Bracey, who was settling into married life in the states. Ella had no intent of staying in the country, yet, in Washington, D.C., she found home. Ella’s first job was in the medical/surgical unit at the George Washington University Hospital, where she made many lifelong friends. She moved to the operating room of the Columbia Hospital for Women and would spend several decades there, during which she helped to welcome countless lives into the world and assisted with thousands of surgeries.

Ella raised her only child, Ingrid, by herself and far from her family, but her unconditional love and devotion weakened the forces of absence and distance. If there ever were a human whose love could outshine difficulties, it was Ella. Her parents would often visit from Norway, and there were many trips back to Norway to catch up with family.

Ella took an early retirement in 1996 to help take care of her granddaughter, Madeline. She followed her daughter to Maine in 2003 and began working part time at both Miles Hospital and St. Andrew’s Hospital as a nurse supervisor. Her years in Maine were spent helping with her two grandsons, Vladislav and William, and continuing on adventures with the many wonderful friends she had met in her life.

Ella had a true lust for life, a constant readiness to experience its joys, alongside steadfastness in the face of its difficulties. She loved unconditionally and was always ready to be a sort of mother or grandmother for those who needed a little extra warmth and care in their life. Eldbjorg Mjelstad was a pure and loving soul. She was the best of us.

She is survived by her sister, Ingrid Bracey; daughter, Ingrid Mjelstad Sherrill and her husband, Andy; and her three grandchildren, Madeline, Vladislav, and William Sherrill. She had a special relationship with nephews Eric and Bryan Bracey and niece Kristi Mjelstad.

There will be a celebration of life and cookout next July. Ella will be buried next August at the Hamre Church in Norway.