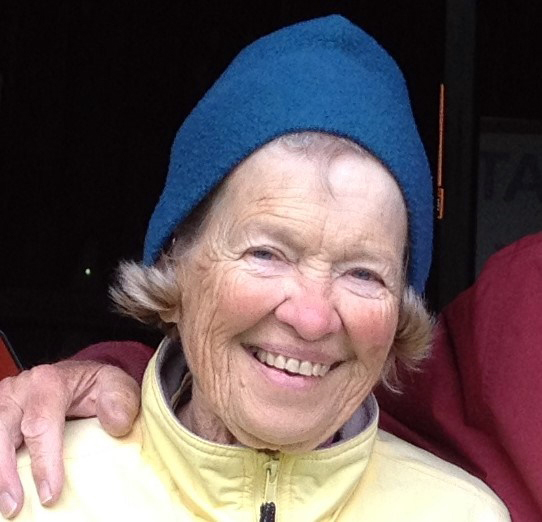 Elizabeth (Wood) Loemker Furber died in the early morning of July 21, 2021, at her home in Southport, attended by her sons, Bill, Tom and Win.

Liz was born in New York City on Sept. 26, 1930, 10 minutes before her twin brother Thomas Loemker, a feat that she was quick to remind him whenever the opportunity arose. She attended lower schools in New York, then attended Middlebury College, from which she graduated with honors before completing graduate studies in business at Radcliffe College.

After school, Liz went to work at the Kendall Company. Skiing one weekend at Cannon Mountain she renewed an acquaintance with a classmate from Middlebury named Edward Furber and in September 1958, they were married and moved to New Hampshire, where for a time, Kendall, loathe to lose her to domesticity, flew her back and forth to New York. She dearly loved her work, but after their first child was born she chose to stay at home and focus on her growing family. Three boys arrived within three years, keeping Liz very busy indeed and she nurtured a closeness among her boys more often reserved for friends than siblings.

The family moved from New Hampshire to upstate New York and back to New Hampshire, settling in Bow, where they lived from 1970 until Liz and Ed built their retirement home in 1991 on family property in Southport.

Liz loved to travel. From a cross-country drive in her early 20s to trips all over the U.S. and Europe with Ed and her sons, she viewed travel as an educational joy. Most school vacations were filled at least partly with visits to museums and historical sites, especially Washington, D.C., New York, and Boston.

Liz’s education of her sons was manifold: Building their vocabularies by conversing generally as if she were speaking with other adults; fostering a love of reading through frequent library visits where her boys were encouraged to pick up any book and read the first two pages and, if they found themselves reading the third page, to take it home; the world of books coupled with frequent travels to New York City and Boston and the many wonderful hours spent in the theaters and museums therein gave all three sons a broad view of the world and an urge for travel and exploration; while the six weeks spent in Southport at the cabin each summer anchored her sons in the value of family, time and tide.

Liz stayed at home until her sons were old enough to fend for themselves after school and re-entered the workforce at the New Hampshire Commission on the Status of Women, which she came to lead along with the New Hampshire League of Women Voters. She moved into the private sector, working as a personnel consultant with Paul Woodbury and Associates in Concord, N.H.

Retirement was hardly retiring for Liz who volunteered with many local nonprofits, including the YMCA and the Saint Andrews Hospital Auxiliary where she eventually was proud to serve as president.

In 2015, Ed and Liz moved into St. Andrews Village in Boothbay Harbor where they enjoyed several happy years with new friends and old while still being able to spend some of the year enjoying family and friends boating, sitting on the porch and celebrating holidays at the house on Southport, where she continued her practice of staying up as late as she possibly could to enjoy the company of her visiting sons and their friends and families.

Liz is survived by her three sons and seven grandchildren, Stassy, Katie, Aly, Clementine, Jillian, Miles and Jack. In the week following her death, the family were all fortunate enough to join the children and grandchildren of Liz’s twin brother at a family reunion on Frye Island, an annual tradition started by Liz’s brother in 2009. Tom Loemker predeceased Liz by only a few months, so the reunion included many stories about the twins, exactly the sort of memorial that Liz would have wanted.

At Liz’s request the memorial service will be kept simple, with a few friends and family swapping stories of her life. To extend online condolences, please visit hallfuneralhomes.com.