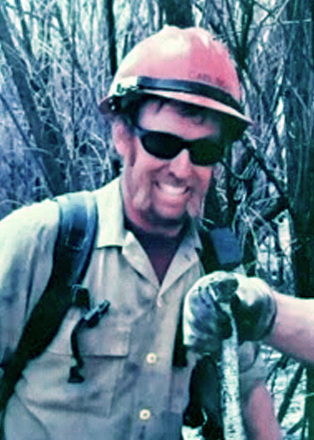 “The mind only knows

what lies near the heart,

that alone is conscious of our affections.

No disease is worse to a sensible man

-Thorpe in “The Study Havamal”

Erik lived his life in harmony with the natural world — the Maine woods, the Big Sky of Montana, and the sandy beaches of Cape Cod. He had a deep love and appreciation for the outdoors and all its inhabitants. He was a fiercely loyal and loving man who never wavered in his commitment to family and friends.

Born in New Haven, Conn., Erik spent his childhood in Barnstable, Mass., New York City, and Norwalk, Conn. He built his house on his woodland by the Sheepscot River, from timber he cut and milled himself.

Erik graduated from the University of Maine at Orono with a degree in forestry. He spent the next three decades working in the woods and promoting an understanding of sustainable and responsible forestry practices. Through his company, C and L Forestry, Erik helped countless private landowners learn about and manage their forests. He served as chairman of the board of directors for CLP, Certified Logging Professionals.

Erik’s great love was fighting wildfires across the western U.S. as a member of the Bitterroot Hotshot Crew. Working for the U.S. Forest Service, Erik served as team captain and was selected to become a member of the elite smokejumpers. Ultimately, Erik chose to return to Maine to be with his young daughters, a decision he never regretted. Each summer and fall brought a special nostalgia as Erik watched the teams of dedicated men and women fighting tirelessly out west.

An avid hunter, Erik looked forward to duck and deer hunting, more for the time to commune with nature and close friends than for the hunt itself. Spending hours in a tree stand surrounded by the quiet of the woods, he was amazed and amused by the power and trickery of animals. This was Erik’s paradise. His only regret was not being chosen for a coveted moose permit.

Erik was always game for an adventure — whether it be a drive along the coast of Maine, a visit with family in Sweden, a swim in the pristine waters of Antigua, or a feast of beignets in New Orleans. His famous “dad jokes” amused his amazing neuro-oncologist, Dr. Christine Lu-Emerson, who sent him off with a well-rehearsed “S-car-go” joke of her own.

Erik fought a valiant battle against glioblastoma. He continued to work, travel, and live a vibrant life for 18 months after his diagnosis. He was determined to never let the disease define or control him. Ultimately, Erik chose to live his last days on his own terms. He bravely “paid it forward,” telling his story in hopes of helping others.

Erik died at home, surrounded by loved ones. He is survived by his daughters, Isabel and Amelia; his sister, Lindsay and brother-in-law Matt Menough, and nephew, Kellan; and his beloved canine sidekick, Sula Danger. His mother, Ruth, was by his side when he died. Erik was predeceased by his father, Albert Carlson, and stepmother, Susan Wood. He also leaves behind the Wood family; his stepfather, Jon Eames; an army of wonderful friends; and his partner, Stephanie Noyes McSherry.

To honor his wishes, there will be no service, but a private celebration of his life next summer with music, dancing, and joyful remembrance. Erik asked that anyone wishing to make a donation on his behalf consider Certified Logging Professionals, P.O. Box 557, Jackman, ME 04945; or the Glioblastoma Society, P.O. Box 62066, Durham, NC 27715.

Arrangements are under the direction and care of the Strong-Hancock Funeral Home, 612 Main St., Damariscotta. Condolences, messages, and memories for Erik’s family may be expressed by visiting his memorial page at stronghancock.com.