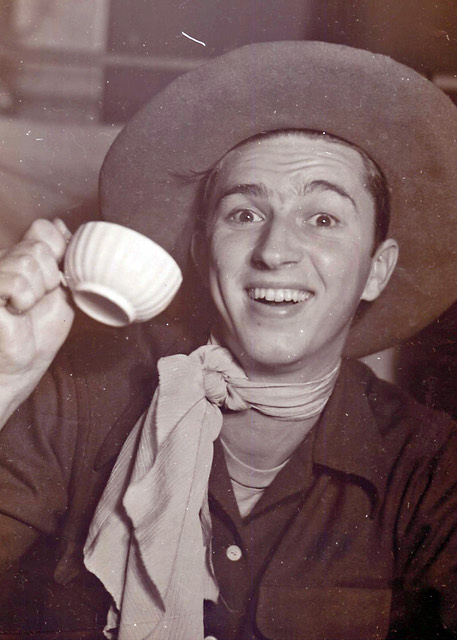 This day we lost a great teacher, friend and neighbor, and a loving father, grandfather, father-in-law, and uncle. He was an artist whose silversmithing talents created many handmade engagement and wedding band sets for the community. He brought together love, laughter, community and family.

Tommy’s days were spent exploring the ancient woods, fields and pastures that were still being used to graze livestock and farmed for hay and gardens by neighbors. He spent many hours rowing his rowboat on their little pond where he kept a pair of Peking ducks. One summer, while he and his cousin were walking in the woods, he happened upon a baby snowshoe rabbit hiding under a leaf who became his beloved pet Thumper. Tommy and all his menagerie would travel from Bristol to New Rochelle on the train seasonally.

Tommy attended primary and high schools in New Rochelle, N.Y. Starting his collegiate studies in 1948 enrolling in the Huguenot School of Art In New Rochelle, N.Y., earning his first art diploma to study as a portrait painter with emphasis on illustration for a career in commercial art. He graduated in 1951.

Tommy is a veteran of foreign war, having served in the United States Air Force during the Korean War, 1951-1954. Returning state-side, he continued his studies at the Museum of Fine Arts Boston, studying silversmithing and metal work. Tommy met his future wife Evelyn in that class, who just happened to have an empty students silversmithing bench beside hers where Tommy set up his student workspace. At his bench Tommy quietly made a ring that was to become Evey’s engagement ring. Asking her to marry him, he placed it on her ring finger. They were married in June of 1956.

After graduating, Tommy worked at Patrick Gill Co. Woburn, Mass. as an industrial designer specializing in ecclesiastical production where he worked on commissioned pieces. In 1958, Tommy and Evey also established their first silversmithing business based out of their apartment in Boston. Here they shared silversmithing responsibilities to complete commissioned pieces.

In the summer of 1960, while visiting his parents’ summer home in Bristol, Tommy took a country ride after dropping his mother off at a beauty parlor in Damariscotta, and found his future home. He called Evey back in Massachusetts and said, “I found a place for your horse!” Soon after, they set about rebuilding their 1760’s vintage house and barn. Evey’s beloved Morgan gelding Rob Roy took up residence in his new stall. Tommy continued to commute to Woburn for work.

Tommy continued to work at Patrick Gill Co. until 1966. During this time he set up his studio in Maine on weekends while commuting to MFA in Boston to teach during the week. At his home studio his focus was on commissioned ecclesiastical pieces and reproduction holloware.

Tommy was contacted in 1970 to establish a jewelry and silversmithing department at the Portland School of Art (PSA) in Portland (now known as Maine College of Art). Here he built silversmithing benches for his students, and kitted the department with a few of the basic tools from the original MFA pattern set.

In 1972, Tommy retired from his Museum of Fine Arts teaching position, and continued to work at Portland School of Art until retiring from teaching in 1979. He could now work full time at he and Evey’s silversmithing business, Thompsons Studio, Inc. Tommy officially retired in 1993. He dissolved their business, closed the door, and went “Up Ta Camp.” Tommy and his beloved Evey enjoyed their retirement between their home in Damariscotta and their camp deep in the woods of Maine. They planted their vegetable and flower gardens to share with the beaver, moose, deer and Canadian geese. In retirement, Tommy returned his focus to painting, and enjoyed seasonally exhibiting his landscape watercolor and oil paintings at the Pemaquid Group of Artists at the Bristol Parks, Pemaquid.

Tommy was predeceased by his parents, Ernest T. Thompson Sr., and Florence M. Thompson; and his beloved wife of over 50 years, Evelyn M. Thompson.

He leaves behind his daughter, Heather T. Roberts and her husband, Kenneth R. Roberts; and his beloved granddaughter, Abigail D. H. Roberts, all of Damariscotta; step-granddaughters, Heather V. Brewer, of Boothbay Harbor, and Amber L. Dalton, of Wiscasset; nieces, Karen Hoehn, of Florida, and Marcia Toki, of Derry, N.H.; nephews, Richard Hoehn, of Methuen, Mass., Fritz Hoehn of Plaistow, N.H., and Von Hoehn of Plaistow, N.H.; and all our family that descended from Sherman Place in Woburn and East Boston, Mass.

A memorial service will be held at 12:30 p.m. on Saturday, June 24, 2023 at the Strong-Hancock Funeral Home in Damariscotta. He will be laid to rest following the service at the Chamberlain Cemetery in Round Pond.