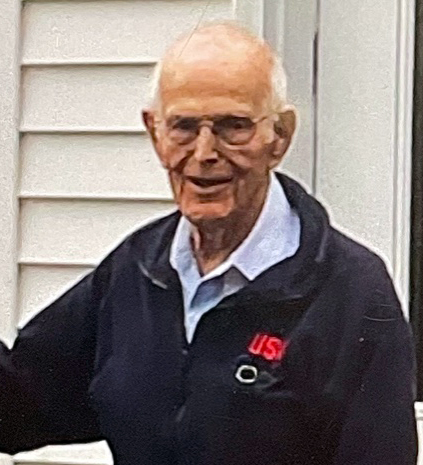 Erwin Forest Hutchins, 98, passed from this life into eternal life on Saturday, Sept. 4, 2021, at the Sussman House in Rockport.

He attended the University of Maine and graduated with a degree in electrical engineering.

Erwin was drafted into the U.S. Army and served throughout Germany, France, and Belgian during WWII, including the Battle of the Bulge.

On Aug. 14, 1948, he married Laura (Craft), a home economics teacher who remained his beloved wife for 57 years. They created a home in Waldoboro where their three children were raised. Erwin and Laura were also active members of the United Methodist Church.

Erwin was employed by GTE Sylvania for 33 years prior to retiring in 1984.

Erwin was a devoted father, husband, and friend to many. He loved the outdoors during all four seasons. From building trails, stone walls, cutting wood to share, including every possible tractor maneuver known, he remained engaged and appreciative of each day. Spring would signal time for Erwin’s infamous maple syrup operation and hosting of his “pancake breakfasts” for neighbors, friends and family. He and Laura often enjoyed simple drives throughout the countryside, autumn foliage, Pemaquid Point Lighthouse, and sailing amongst the islands of Penobscot Bay.

Erwin was predeceased by his wife, Laura; his sisters, Martha Stickney, Luella Fraser, and Alena Fraser; and his brother, Mark Hutchins.

He is survived by his son, Brent Hutchins and his wife Martha of Albion; daughters, Jeanne Hutchins of New Gloucester, and Carol Jacques and her husband Corey of Saco; his sister, Clara Hutchins of Brunswick; and brother, William Hutchins of Florida. Erwin also enjoyed his five grandchildren and 13 great-grandchildren.

The service to celebrate Erwin’s life will be held at 11 a.m. Wednesday, Sept. 8, at Hall Funeral Home, 949 Main St., Waldoboro. Burial will follow at the German Church Cemetery.

Contributions in his memory may be made to the Barbara Bush Children’s Hospital, 22 Bramhall St., Portland, ME 04102.

Arrangements are entrusted to Hall Funeral Home and Crematory, Waldoboro. Condolences can be shared with the family at hallfuneralhomes.com.