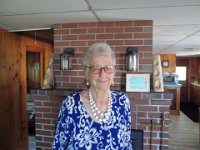 Born on March 8, 1929 and raised on the family farm in Jefferson by her parents, the late Elmer and Hazel (Black) Orff, she grew up with four sisters and four brothers. She was small but strong helping with haying, driving tractors, raking blueberries, and she could put a yoke on an oxen as good as her brothers.

At the age of 19, she moved to Portland where she met her husband of 56 years, the late Francis “Bucky” Buck while working as a waitress. Together they raised their family of four boys and two girls. Having left school before graduating, she was very proud of the fact that she got her high school diploma in 1971 while attending night school.

After raising her family, she went to work for the Portland school district as a “lunch lady” until she retired with 22 years of service. She started at Deering High and worked through the Portland school system with her last assignment being King Jr. High.

Teddy had four loves in her life. Her first was her family. As our matriarch, she took great pride in all of our accomplishments. Not one of us went without a birthday, anniversary, or special occasion card. She loved family gatherings and always made a point to be at any celebrations. A wonderful cook, we will forever remember her apple pies, zucchini muffins (with and without raisins), cutout sugar cookies shaped for various holidays, popcorn balls, carrot salad, veggie dip, and so many other treats that she shared with all of us.

Bowling was her second love. An avid candlepin bowler, she was part of several bowling leagues beginning in 1972 and continued in a bowling league up until the beginning of April 2022. She kept saying she wasn’t a very good bowler, but we all knew better. Her bowling friends all loved her and will no doubt miss her when they start up again in the fall.

Her third love and favorite pastime was knitting. She was a self-taught knitter and could knit sweaters, mittens, hats, afghans, scarves, Christmas stockings and just about anything else. Teddy entered many of her knitted goods in the Windsor, Cumberland, and Oxford fairs every fall and was awarded many ribbons.

Teddy was a die-hard Boston Celtics fan and although she loved swimming aerobics at the YMCA, we have to go with the Celtics as her fourth love. She didn’t miss any of their games, listening to them on the radio while sitting in her chair and knitting, of course.

The trips she took with Portland Parks and Rec also brought her great joy. And, she loved her little condo and walked around the circle as often as the weather permitted.

She was predeceased by her brothers, Wilbert and Lincoln Orff; her sisters, Lydia Willette, Marjorie Freeman and Seba Ritchie; and one grandchild, Susan Buck. She is survived by her four sons, Gary Buck (Brenda), of Windham, Randy Buck (Anita), of Gorham, Mark Buck (Shirley), of Jefferson, and Kevin Buck (Tammy), of New Gloucester; two daughters, Gail Buck of Pahoa, Hawaii and Jody Smith (John), of Poland; two brothers, Robert Orff and Rodney Orff, of Jefferson. She will also be missed by her 11 grandchildren; many great-grandchildren; and one great-great-grandchild; not to mention the many friends she made over the years.

Teddy’s life was truly a life well lived and although she will be greatly missed, the memories we shared with her will be with us forever.

The family would like to thank the third floor nursing staff at Mercy Hospital for their kind and compassionate care during Teddy’s final days as well as their tireless answering of phone calls.

A visiting hour will be held from 10-11 a.m. on Friday, May 20, 2022, at Jones Rich & Barnes Funeral Home, 199 Woodford St., Portland, followed by a funeral service at 11 a.m. A reception will follow at the funeral home. Burial will be held later in the afternoon at Brooklawn Memorial Park in Portland.

In lieu of flowers, donations may be made to the Maine chapter of the American Cancer Society.