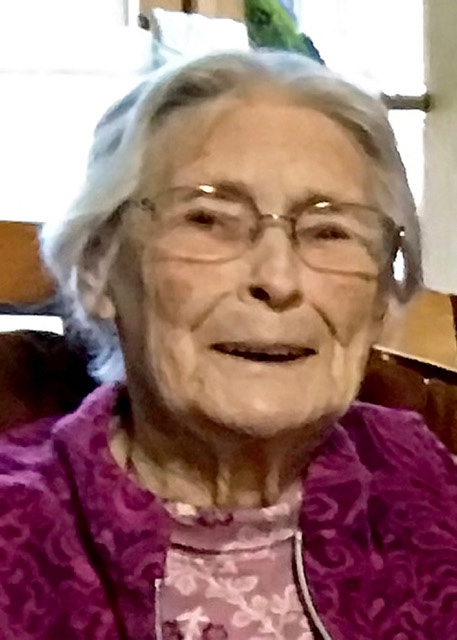 Etta Clara Morrison, 90, passed peacefully on the morning of Friday, Sept. 17, 2021, at her home in New Harbor, surrounded by love.

Etta was born the second eldest of five children to Alberta (Sprague) and Theodore Buswell in Minturn, on Swan’s Island, on June 4, 1931.

Etta grew up on Swan’s Island, where she lived, worked, and started her own large family. She resided there until 1978, when she moved to New Harbor.

Many of you will remember Etta as the strong-willed matriarch of the Morrison brood, lover of animals, and wonderful cook.

Perhaps what you may not realize is that she also wore many hats throughout her 90 years. She ran the family restaurant and campground, worked at the family wharf and home heating business, owned a yarn/knitting business, knit trap heads for the local lobstermen, cleaned houses, and “could teach truck drivers today, a thing or two!”

She did all of these, while raising eight children. To say she was a woman of determination and ingenuity, simply doesn’t do her justice. She was a force of nature.

Etta was predeceased by her parents, Alberta and Theodore Buswell; her husband, Mertic Morrison; sister, Theresa Orcutt; son, John A. Morrison; and daughter, Myrna A. Morrison.

Per Etta’s request, there will not be a funeral service.

When tomorrow starts without me – Erica Shea Liupaeter

So, when tomorrow starts without me

For every time you think of me,

I’m right there in your heart.