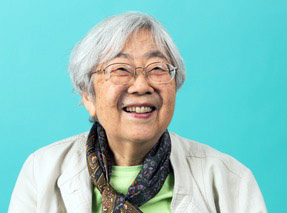 Florence Numajiri Field passed away peacefully on July 2, 2021, just one month shy of her 97th birthday. Florence was an accomplished artist, a brilliant writer and organizer, a joy-filled friend, and a loving mother and grandmother. Though small in stature, Florence was a mighty, yet humble, bundle of passion and righteous action on behalf of those in her community.

Florence Sachi Numajiri was born on Aug. 6, 1924 in San Francisco to Chojiro Numajiri and Sai Shibata. In April 1942, the Numajiri family was removed from San Francisco and interned at the Topaz Internment Camp in Utah, in a civil rights outrage that fueled Florence’s passion for justice. She was allowed to attend Heidelberg College in Ohio. After graduation, she enrolled in the University of Chicago, where she met her future husband, John Field. They married in 1950.

In 1966, she received her MA from the Social Service Administration school at the University of Chicago and became an adjunct professor there where she taught social policy and planning.

She and John retired in 1984 to Damariscotta. She continued to create change, founding the Round Top Center for the Arts, the Community Housing Improvement Project, and the MidCoast Transportation Center.

In 2001, Florence and John moved to Fort Collins, Colo. Sadly, John passed away in December 2001, ending what had been an ongoing, lively, intellectual, and loving conversation for more than five decades.

Florence continued her passionate work for peace and justice here in Larimer County through the League of Women Voters. She founded a local ACLU chapter. In 2014, Florence was named a Super Woman by the Fort Collins Coloradoan and was awarded the City of Fort Collins Human Relations Award.

A passionate fighter for justice, Florence was always joyful and reveled in life. She loved spending time with her sons and grandchildren and discussing politics and the events of the day. Her favorite phrase sums up her view of life: “Oh, goody!” She will be deeply missed. She is survived by her sons Andrew and Stuart; daughter-in-law, Julie; and grandchildren, Samuel and Ellen. She was preceded in death by her husband John.

A celebration of Florence’s life will be held on Saturday, Aug. 7 from 5:30-8 p.m. at the Children’s Garden at the Gardens on Spring Creek in Fort Collins, Colo.

In lieu of flowers, Florence requested that memorial donations be made to the ACLU or the League of Women Voters. For further information, see bohlenderfuneralchapel.com.