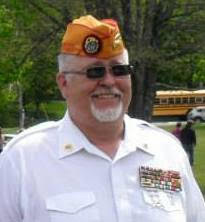 Gary I. Lawyerson died Aug. 14, 2021 at his home in Waldoboro. Gary was born Dec. 14, 1950 in Fort Lee, Va. to Ivan and Patricia (Carey) Laweryson. He grew up in Moscow and Bingham and graduated from Valley High School. During his high school years, Gary excelled at basketball and fought forest fires on the “Hotshot Crew.” He also taught swimming lessons.

Gary worked tirelessly. For the next 26 years, he served tirelessly for the veterans of the State of Maine and New England. As chairman of the Marine Veterans Coordinating Committee, Gary provided leadership that stopped the VA from closing VA Togus and helped enact legislation to benefit veterans in the state. He served on several committees with the VA. Gary was on the committee to establish Togus Springs. He served on the Maine Veterans Cemetery Committee.

Gary served as aide-de-camp to Governor Baldacci and was instrumental in getting the white upright grave stones at the Mt. Vernon Veterans Cemetery. “Now it looks like a veterans cemetery.” He also taught Young Marines for many years.

Many will remember Gary as the MC at the Maine Veterans Cemeteries in Augusta for 18 years.

Gary was well loved by his family, especially his grandchildren. He loved to fish and hunt and was known as “the Bear.”

Friends are welcome to join the family Sept. 3, 2021 at The Elks Club, 397 Civic Center Drive, Augusta for a time of visitation from 10 to 11a.m., service to follow and burial at 1 p.m. with Military Honors at the Maine Veterans Cemetery, 163 Mt. Vernon Road, Augusta.

Arrangements are entrusted to Hall Funeral Home, 949 Main St., Waldoboro. Condolences for the family may be shared at www.hallfuneralhomes.com.