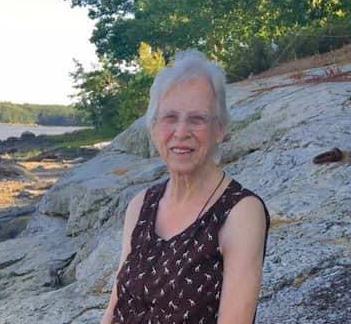 Genevieve Mair McLain, wife of the late Ernest R. McLain, of Bremen, passed away on Friday, Sept. 24, 2021, at the home of her son Christopher McLain in Parsonsfield. She was born on Aug. 12, 1929, the youngest daughter of Henry W. Mair and Genevieve Toner Mair in Tenants Harbor. Her father was a gold medal marathon runner and cyclist who immigrated to Boston from Aberdeen, Scotland.

Her childhood up the age of 9 was spent in Tenants Harbor. The family moved to Rockland and her father died later that year. She spent the next two summers with Frank and Mary Childs in Belfast. The best time of her childhood.

When she turned 13 she was hired at F. W. Woolworth’s where she worked part time for 7-and-a-half years. She also worked at Van Ballan for four years until she and her sister opened The Silver Maple Lunch Room. After that, she worked at New England Telephone Company.

She married Ernest McLain in 1957, and moved to Bremen and then to Waldoboro in 1966.

She loved to hook rugs.

She was predeceased by her parents; her husband; son, Gregory; two sisters, Frances Mair and Gilberta Jordan and her husband, Bud; and nephew, Scott Jordan.

A time of visitation will be from 2 to 3 p.m. Wednesday, Sept. 29, followed by a funeral service at 3 p.m. at Hall’s of Waldoboro, 949 Main St., Waldoboro. Burial will be at the Maine Veterans Cemetery at a later date.

In lieu of flowers, donations can be made in Genevieve’s memory to any animal shelter of your choice.

Services are entrusted to Hall Funeral Home of Waldoboro. To share condolences, go to hallfuneralhomes.com.