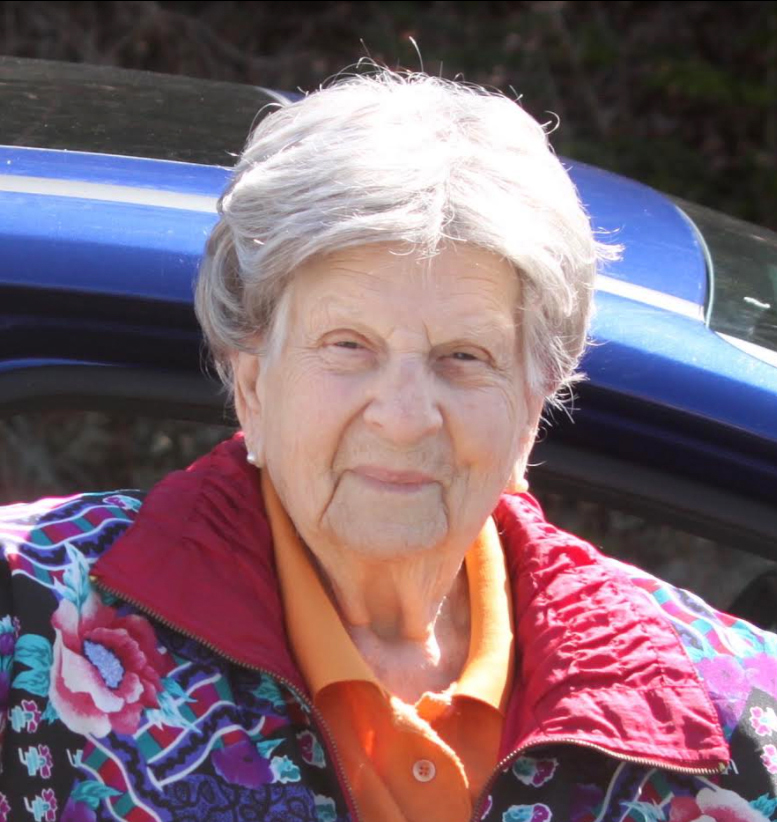 Most don’t live to be a centurion. There isn’t a Roman army anymore, so you can’t become one that way either. A Boston Post Cane recipient for being “the Oldest [sic] resident of Bristol” was awarded to Gina at age 98. Gina Rayburn died on July 22, 2021 at age 101.

Gina was born March 27, 1920 in New Sweden to Eric and Naemi Hanson. She is predeceased by her husbands, James and George; her companion, Lincoln County artist Milton Hart; two sisters, Ebba and Ulla; and three children, James, Loree, and Eric. She is survived by three grandsons, Frank Doore, and George and Hudson Rayburn; a niece, Vicki Loveridge; and great-nephews, Bill and Craig. Gina also had cousins in Massachusetts and Sweden who remember her fondly.

Gina was a storyteller, an adventurer, and described by good friends as a “tough ole bird.” She loved frogs, quilting, canary glass, and bickering with her sisters. She spoke Swedish and English and had traveled to Sweden several times, once as a translator.

Gina was first married in 1940 to John Gurney Doore. She had her first child, James Doore, in 1943. Gina trained in medical technology and worked as a phlebotomist and physical therapist in Boston and Washington, D.C. Tired of being compared to her sisters, Ebba and Ulla, in 1947 she moved to Fairbanks, Alaska, with her husband and young son Jimmy.

Gina became an Alaskan through and through. She was a markswoman and for many years ran her own natural foods store, Gina’s Corner, in Fairbanks and later in Damariscotta. She carried a gun as she was responsible for bringing the money from the Fairbanks Coop to the bank. Fairbanks in the 1940s was a wild west town. She’d walk to work every day, while sometimes for weeks it would be -50°F or “whatever it was.”

Divorced from Doore in 1950 and married to George Rayburn later that year, she had two more children with George: Loree and Eric.

She was a member of several Lincoln County churches since the 1970s. She lived in Waldoboro, Walpole, Edgecomb and for the last 20 years, Bristol. She was an active member of the Ladies’ Aid quilting group in Bristol Mills, as well an “Honored Matron” in the Eastern Star in Fairbanks.

She told a story that the Alaskan police came to her to ask her if she had a gun and knew how to shoot. She showed ’em from 100 meters that she could snipe a tin can and the officer said, “Okay, looks like you’re all set.”

Gina and George worked for and owned planes at Wien Airlines in Fairbanks. She got used to flying in small planes all over Alaska.

When they could get away from work, they’d hop in a station wagon with George’s band and hit up Alaskan event halls. George was the drummer. Her friends would come along and it was Gina who’d make sure they didn’t get into trouble with single men. Gina never stopped dancing. When she broke her back giving birth to Eric, the doctor prescribed dancing and she didn’t hesitate to heal up on the dance floor. George would always tell her, “You danced to every song!” And she’d say, “Yeah? Of course I did!”

Gina had several beloved cats, especially Sara, who will have waited up for Gina. Gina had a fondness for movies and especially those with a zestful sense of humor. She took her grand-nephew Bill to see a Seth MacFarlane film, “A Million Ways to Die in the West,” and surprised him by laughing at all the lewd jokes. From that they started a movie club together. Gina was generous with her stories and time, teaching card games, investment strategies, and recipes.

Gina was an engaging and powerful personality. She will be missed. At the same time, Gina led a life to be envied and was satisfied with all she’d done and spoke. Her stories and words will persist in the memories of friends and family.

As Gina would have quipped in conclusion, it’s “alla samma deg (all the same dough).” And even though Gina’s passing is a salty soup to swallow, all of us will come to the end of our bowl. So, let’s echo what Gina liked to recite, “Mycket god soppa, Selma. (Wary god souppa, Selma. Very good soup, Selma.)”.