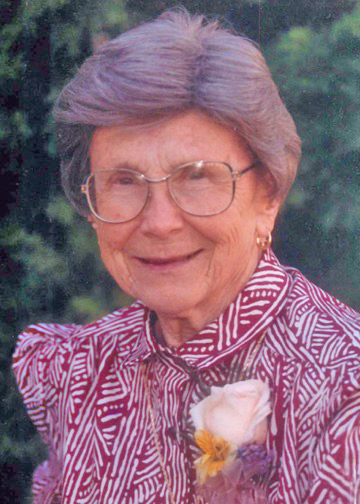 Geraldine Maude Tibbetts Kelsey, 98, the oldest living resident of South Bristol, passed away on the morning of Sept. 16 at Cove’s Edge in Damariscotta. She was born on Jan. 19, 1918 in Christmas Cove; the second child and only daughter of Edward and Maude (Burns) Tibbetts.

She attended South Bristol School and was the last surviving member of her 1936 high school class, of which she was valedictorian. In 1938, she married Lewis T. Kelsey, a local lobsterman and made the two mile move to their home near the Gut in South Bristol. She lived there for the next 74 years.

A housewife and homemaker, she was always very active in community and church activities. An avid reader, she was a long-time trustee of the Rutherford Library Association. During WWII, she and many others along the coast were volunteer observers for enemy aircraft and submarines. She served as a town ballot clerk. After her children were grown, she secured a job working at the Lincoln County Court House where she opened, pressed and microfilmed two centuries of county records that had been stored in the attic.

A nine-decade member of the Union Church of South Bristol, she supported and worked for the church with her usual vigor. This strong work ethic mandated that “hobbies” be for the assistance of others. She was a long-time volunteer Gray Lady at several hospitals and nursing facilities, including Cove’s Edge where she ended her days. She and other close friends formed a Ladies Aid Society that sewed, knitted and gossiped for the community good.

Like many of the old families in the area, she was related to a large number of people who lived, and live, in the coastal areas of Maine, New Hampshire, Massachusetts, and Rhode Island. She enjoyed material collected by a family genealogist; especially stories about her eight Mayflower ancestors and her numerous ancestors who served in the Revolutionary War. They left an indelible mark on this tough Yankee woman.

Besides her parents, she was predeceased by her husband, Lewis after 45 years of marriage; youngest son, Mitchell; and brother and sister-in-law, Herbert and Mae (Rice) Tibbetts.

A memorial service will be held at 2 p.m., Sun., Oct. 9 at the Union Congregational Church of South Bristol.

Arrangements are under the direction and care of the Strong-Strong Hancock Funeral Home, 612 Main St., Damariscotta.