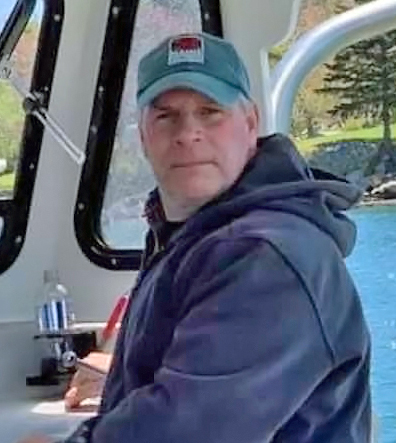 Gregory A. Gamage, 61, of Jefferson, passed away on the evening of May 29, 2021 after a courageous battle with cancer. Born on Sept. 4, 1959 in Damariscotta, he was the son of Arnold and Gloria (Chipman) Gamage.

Greg grew up in South Bristol, attending local schools and graduating from Lincoln Academy in 1977. After high school, he started what would be a lifelong career on the ocean. For several years he fished for scallops, as well as groundfish in the Georges Bank.

Greg was a very easy going man who enjoyed living a simple life. He enjoyed NASCAR and watching his grandchildren’s sporting events, but more than anything he loved spending time with his wife, children, grandchildren and extended family. His life really centered around his love of family and fishing; both of which will miss him immensely.

Besides his parents, he was predeceased by his three brothers, Arnie, Troy, and Gerald.

He is survived by his loving wife, Charlene Gamage; son, Travis Gamage and his wife Trudy; daughter, Megan Gamage and her significant other Michael; and Ashley Reed, who Greg thought of as his own; four grandchildren, Mackenzie Gamage, Zach Gamage, Chase Crockett, and Braxton Crockett; one great-granddaughter, Braelee Gamage; as well as many nieces and nephews.

A service for Greg will be held at 10 a.m. on Saturday, June 5 at the Strong-Hancock Funeral Home in Damariscotta. While occupancy limits and distancing requirements have been lifted, face coverings must still be worn at public indoor gatherings. He will be laid to rest privately in the Holy Family Cemetery in Augusta at a later date.