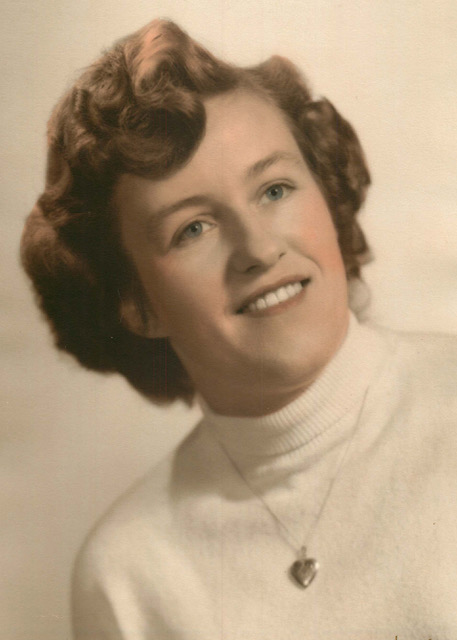 Gwendolyn Poland, wife to Edward “Buddy” Poland, and mother to her four sons, Buddy Jr., Frank, and Michael, all of Round Pond, and Dana of Plattsburgh, N.Y., passed away at her home on the afternoon of Sept. 12 surrounded by a large group of family.

Born on March 30, 1934 in the Timber Point Road, Friendship home of her parents, Irving and Florence (Spence) Simmons, she spoke fondly of growing up at the farm down in “Goose River.” She attended Friendship schools and graduated from Waldoboro High School in the class of 1953. After graduation, she spent time working in Clearwater, Fla. and as an office worker for a Hartford, Conn. insurance company before marrying and settling in her Round Pond home for the next 63 years.

Forever social, she hosted many big gatherings and somehow could feed an army of people on short notice. She always kept herself busy at the house, though work could slow down when “The Young & the Restless” came on at 12:30. She looked forward to the two-week stays that family friends from Massachusetts would have on Biscay every summer, where all-night poker games would most times find her in the money by morning. She enjoyed traveling and made several trips, but the one she made to Nashville, where she met Vince Gill and got to sit onstage at the Grand Ole Opry during one of his shows, was one she talked about for years afterward.

Predeceased by her parents, brother, Robert of Friendship; and sister, Janis of Thomaston; she is survived by her husband and four sons; along with grandson, Benjamin of Portland, and granddaughter, Clara of Hayward, Calif.; and her sister, Linda Maloney of Cushing; along with many nieces and nephews. Good natured and good humored, she remained that way right to the end.

A time to visit with family and friends will be held on Thursday, Sept. 19 from 6-8 p.m., at the Strong-Hancock Funeral Home in Damariscotta. A celebration of Gwen’s life will be held at 1 p.m., on Friday, Sept. 20 at the Little Brown Church in Round Pond. A reception will follow the service at the Wells-Hussey American Legion Post #42 in Damariscotta. She will be laid to rest privately, at a later date, in the Maple Grove Cemetery in Round Pond.