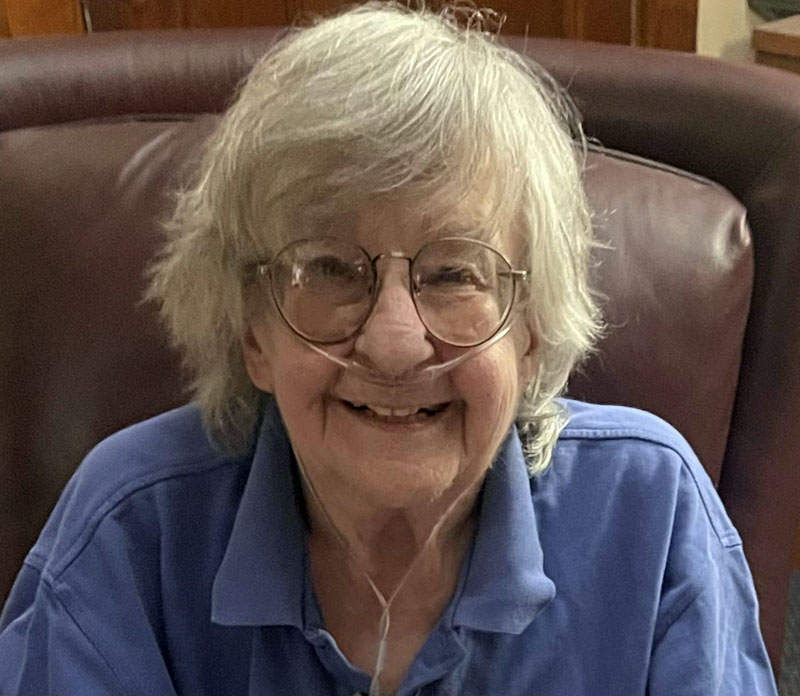 Heather Ann Chapman, 76, of Newcastle, checked out of LincolnHealth’s Miles Campus in Damariscotta and headed straight to heaven, where she had reservations for a permanent suite on Saturday evening, Nov 27, 2022.

She was born in St. John, New Brunswick, Canada to her biological parents, Jacqueline Ebbertt, an English girl and Headley Donovan, an Irish boy on July 26, 1946. On Jan. 10, 1947 Heather crossed the border with her adoptive mother, Marjorie Jones Chapman, via train, into the United States. Awaiting them was her adoptive father, Henry Philip Chapman Jr.

In 1955, at the age of 7, Heather and her mother, Marjorie, became United States citizens with her father Phill present. She was always so proud to be a U.S. citizen, standing and placing her hand on her heart each time she heard the “Star Spangled Banner” play. Tears of pride would roll down her cheeks and she would look up to heaven and tell Marjorie and Phill, her adoptive parents, thank you.

Heather grew up in Longmeadow, Mass. where she developed a fondness for animals, swimming and reading. In girl’s boarding schools in North Hampton, Mass. and Newport, R.I. she fell more in love with sports and in college in Virginia and New York she developed a love for theater. She received an Undergraduate and Master’s Degree in Physical and Health Education in Ithaca, N.Y.

She was a woman of many talents. She taught P.E. at an elementary school in Massachusetts, gymnastics to future Olympian girls in Portland with her best friend, Susie Goldberg, and was a librarian at the Skidompha Library in Damariscotta. Heather is best known in the area for teaching swimming to hundreds of children at the Boothbay Harbor YMCA and the Red Cross Swimming Program at Biscay Pond in Damariscotta.

She loved being a stage manager and lighting expert for various theater companies in the area, having done so for over 150 performances in Damariscotta, Bath, Southport Island, Portland, Poland Springs and other locations. She would always say that the director prepared the actors and actresses then on opening night it was her play to manage/direct.

Heather enlisted in the “AmeriCorps” program for two years, serving people in the Wiscasset area. She used to tell stories about her days painting inside houses and working for a chiropractor in Boothbay Harbor. Her proudest moments were when grown up children would come up to her and thank her for teaching them to swim or work with theater lighting. She was a volunteer at Mobius, a center for people with intellectual and developmental disabilities in Damariscotta, was a member of the Newcastle Historical Society and served on various theater company boards.

Twenty-seven years ago she met and fell instantly in love with a French-Louisiana Cajun woman, Edmee Marie Dejean, who held love potion #9. In 2013, Maine voters approved same-sex marriage, allowing her to legally marry her soul mate, best friend and love of her life. Together, they traveled throughout the United States and abroad, entertained friends and family from Louisiana to Canada and attempted to play golf. Heather was a passionate reader of novels, loved the game show Jeopardy, crazy about her antique convertible Volkswagen she eventually sold due to its constant need to break down and collected antiques, blue glass and Coca Cola memorabilia. She did not like to cook but enjoyed eating in some of the finest restaurants and dives from Maine to Louisiana. Her love of Gulf of Mexico shrimp and Gulf of Maine lobster she maintained to the end. She was a devoted Red Sox and New England Patriot’s fan. Computer solitaire and word games fascinated Heather and watching television crime dramas told stories that intrigued her.

At 58, Heather found her biological mother, Jacqueline, who was living in New Brunswick, Canada. After an adult lifetime of wanting to tell her biological mother that she, Heather, turned out okay and that her adopted parents took great care of her she got chance; it was a dream come true. She discovered she was not an only child but had seven siblings. Almost 10 years later she discovered her Irish Catholic father was deceased, but she had seven more siblings for a total of 14.

Heather is survived by her wife, Edmee Marie Dejean, of Newcastle via way of Louisiana; biological mother, Jacqueline Ebbertt Petley, of New Brunswick, Canada; and 11 half-brothers and sisters in New Brunswick, Nova Scotia and Ontario, Canada. She is also survived by her mother-in-law, Gertie Dejean, of Newcastle, who always kept Cajun food for her enjoyment on the stove and by a special young boy she loved dearly who grew up to be a husband and father, Carl Schroeder, of Newcastle. Dear to her life was her extended family, Lance and Brenna Blanchard and their baby daughter, Esmee Mika, of Jacksonville, Fla.

Heather totally entrusted her medical care to Dr. Minda Gold, who gave her superior medical advice and care. She was thankful for Scott Brooke for being their closest friend, marrying them, being at the hospital, helping in the decision-making and final arrangements, Gertie Dejean for keeping Heather fed and watching over her every day and lastly, the one and only Buddy Boy Einstein, who constantly licked, loved and bugged Heather daily to play fetch and who always managed to make her laugh at his silliness.

Via Heather’s directives, Heather was cremated and her ashes will be taken out to sea in the spring with a portion kept to be buried with her wife, Edmee upon her death. There will be no services or gatherings, per Heather’s request.

Hall’s of Waldoboro has care of the arrangements. To extend online condolences, visit her book of memories at hallfuneralhomes.com.