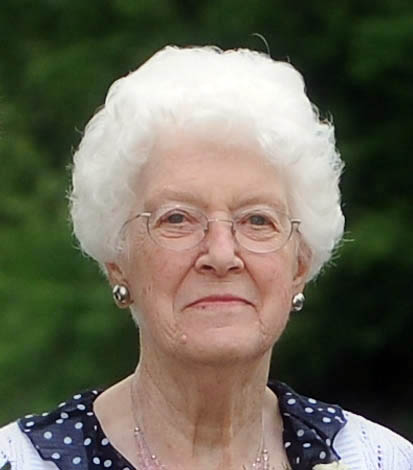 Hellen was born in Gardiner on May 26, 1927, the daughter of Erving and Lois (White) Brawn. She was raised in Randolph, graduating from Gardiner High School in 1945.

She worked for Thompson Lumber Co., before meeting John L. Dancer at her uncle’s store in Randolph. They married on June 2, 1947. John had started a small dairy farm in Whitefield. Mama said that they were able to find someone to care for the farm so they could go to a borrowed cottage for a one-night honeymoon!

They ran the farm, with all of the joys and burdens associated with it, raising a son and two daughters; she said that while waiting for each baby to arrive, she would feel very sick, but she was needed to drive the hay wagon, so she would nap on the truck seat while John and his helpers loaded the wagon! Along with the duties of farmer’s wife, she was also the town clerk for Whitefield during their years on the farm. After selling the farm in 1968, she worked for the Maine Lung Association in Augusta, until her retirement in the mid 1980s.

Hellen loved to sew, making many clothes and birthday and Christmas gifts for her children when they were little. During her retirement years she began creating colorful “potholders,” giving many to family and friends. One of her last sewing projects was making over 50 of these to give to each lady (young and old) at her church. She also enjoyed baking desserts, which the family always thought were the best we had ever tasted! Baked beans were her specialty and were always expected at the “pot-luck” lunches at church. Birdwatching was one of her favorite activities, always hoping to see the cardinals, because, she always agreed with the saying, “Cardinals appear when Angels are near.” She also loved flowers and tended many perennials in her backyard each summer.

Visitation will be held on Friday, Jan. 24 from 12:30 – 2:30 p.m., with the funeral service immediately following, at Staples Funeral Home, 53 Brunswick Ave., Gardiner. A celebration of Hellen’s life will be held following the service at the American Legion, 46 Griffin St., Gardiner.

Burial will take place at the Kings Mills Cemetery in Whitefield, in the spring.

Memorial donations may be made to the Disabled American Veterans or the Maine Farm Bureau.