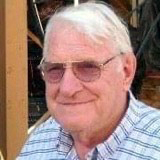 Horace was born on March 8, 1929 in Augusta to Herbert Francis Jr. and Flora Morang Stevens. He graduated from Cony High School and Tuft’s University, Medford, Mass., with a degree in mortuary science. He married Lois Eva Page on Sept. 27, 1952. He served during the Korean War as a medic in the U.S. Army.

Dad moved around a lot. Tom was born in Virginia, Cindy in Rockland, Karen in Hallowell, Linda in Auburn, and Charlie in Augusta. While in high school he worked for his father and the Plummer Funeral Home. His career involved working for the Stilphen Funeral Home in Rockland, Kirschner’s Meats in Augusta, Dillingham Funeral Home in Auburn, back to Kirschner’s as manager of their institutional division, and then his ownership of the Gray Funeral Home in Windsor. He never fully retired. He was always speculating in real estate, fixing up and flipping fixer-uppers while at home and more so when he wintered in Florida. He also worked on old cemeteries. He said the thing he hated the most about getting old was that he couldn’t work!

He traveled extensively all over the country with Mom, often accompanied by Uncle Dave and Aunt Anita. He traveled with Cindy to Australia and the British Isles. He also traveled on numerous cruise ships. He looked forward to having family around. He always bought the lobsters for everyone on Father’s Day, even though this last weekend he wasn’t able to enjoy them.

In lieu of flowers, please send donations to Maine General Hospice at 21 Enterprise Drive, Augusta, ME 04330.