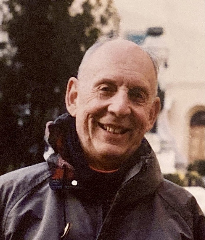 James Bruce Amstutz was born in 1928 in the last days of the British Empire, in Singapore, then part of the Straits Settlements Crown Colony. He lived a life from a bygone era, with an Aya, a driver, a cook, a laundress, and a gardener, and traveled to and from his much-loved boarding school in India (Woodstock), by steamer up the Malayan coast, docking at Rangoon and then Calcutta, where he would catch a train for the cross-country trip to Dera Dun, and from there, by vehicle, then foot, up the winding road to Mussoorie in the foothills of the Himalayas.

World War II changed Bruce’s world forever. On the morning of the Pearl Harbor attack, he and his sister were making the return trip from school to Singapore, and docked at Rangoon when the airfields outside of town were bombed. They returned to India the next day, missing Christmas with their parents, and were housed with a local family. Communications with Singapore were near impossible. Their mother later boarded one of the last steamers to leave Singapore and came to find the children. Bruce’s father stayed behind and was interned by the Japanese with the other Western civilians. For a year and a half they did not know whether his father was alive or dead.

In 1943, with the threat of U-boats a very present reality, Bruce and his mother and sister left India, traveling by ship — from the Bay of Bengal to Durban, South Africa, then across the South Atlantic, around the southern tip and up the western coast of South America, then east through the Panama Canal, finally landing in New York. He went from life in equatorial Singapore to a paper route in Evanston, Ill.

When the war ended, Bruce entered DePauw University, where he was on the intercollegiate swim team and joined the Delta Upsilon fraternity. His father survived the war and became the Methodist bishop in Singapore, and later Pakistan.

After college, Bruce obtained his Ph.D. from The Fletcher School of Law and Diplomacy, where he met his wife, Nan Louise Grindle (also a student and Ph.D. recipient). From the mid-1950s, he served as a U.S. Foreign Service officer, first in Indonesia and later in Burma, Pakistan, Afghanistan, and India. When the U.S. ambassador to Afghanistan was killed in a botched kidnapping, as deputy chief of mission, Bruce became the acting ambassador. And when the Soviets invaded that country, he watched their helicopter gunships roll in. His last post was in Bombay (now Mumbai) as consul general. In 1986, he concluded his career by writing “Afghanistan, The First Five Years of Soviet Occupation,” one of the first books published on the Soviet war in Afghanistan.

After this life of adventure, in 1987 Bruce retired with Nan to Brunswick, where he pursued his passions but hardly led a quiet life. He became a master gardener, visited most of Maine’s state parks, and enjoyed hiking, birding, genealogy, and travel. He often organized international walking and birding trips in Europe and the Americas for small groups of friends and family, and he enjoyed visiting family throughout the U.S. A lover of history, he diligently maintained a list of all books read, beginning with his childhood in Singapore, and continuing throughout his life.

In preparation for retirement, Bruce and Nan bought a small farmhouse on an island off the Maine coast (Louds), which became a cherished summer home for more than 30 years. There, they hosted many friends and family, and Bruce loved to drive his jeep along the island roads, blasting English choral music. He and Nan were an integral part of the island community.

Bruce was married to Nan for over 67 years, but lost her in 2019. He also was predeceased by his sister, Beverly Amstutz Brush, but is survived by his three sons, Eric and his wife Deidre of Greenville, S.C., Timothy and his wife Dawn of St. Paul, Minn., and Mark and his wife Barbara of Swarthmore, Pa. and Southwest Harbor; as well as his beloved grandsons, Andrew of Little Rock, Ark., and David and his wife Meaghan of Brooklyn, N.Y.; and by his stepgrandson, Jefferson and his wife Kathryn and their children, Josephine and Simon of Philadelphia, Pa.

A memorial service is planned for later this year, date to be announced, at the Louds Island Church, Muscongus Bay. In lieu of flowers, gifts may be sent to Maine Coast Heritage Trust (mcht.org); or to the Loudville Church Society, c/o Michael Chaney, Treasurer, 190 Golden Ridge Road, Alna, ME 04535.