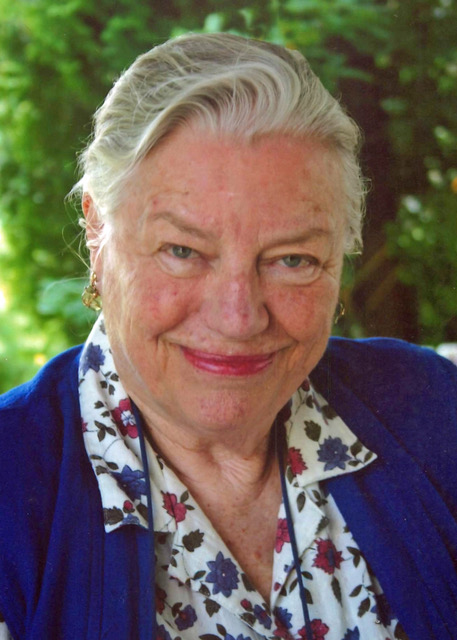 Joan “Maude” Kendall Miller Olsen, of Rutherford Island / South Bristol, passed away peacefully in her sleep on Sept. 5, 2019, a month and four days after her 95th birthday. Born in Manila, Philippines on Aug. 1, 1924, she was the first born daughter of Charles Horace Kendall Miller and Margaret Stetson Kendall Miller.

This is indicative of her prolific, creative and adventurous life that started in the Philippines and continued through Peking, China and other parts of Asia as her father’s career grew as a high ranking officer in the U.S. Navy. As a young child, her father and family were stationed initially in the Boston area, and then were transferred around the United States including California, Washington, and in her high school years Pearl Harbor in Honolulu, Hawaii. Her father was transferred in 1940 back to the Boston area where she graduated high school from Newton High School in 1941. Her family was one of the lucky ones to leave before the attack on Pearl Harbor on Dec. 7, 1941.

And that was just the tip of the iceberg so to speak. Maude would go on to Penn State University and graduate in 1944 earning a BA with a major in entomology, and a minor in art. She even helped illustrate her bug professor’s new textbook! She was only 20 when she graduated, having skipped two grades in grammar school. Her deep appreciation for nature was a contributing factor in her whimsically organic approach to her art forms.

Over her lifetime, she would belong to many art associations and earn one of the first teaching positions at the Farnsworth Art Museum in Rockland from 1980 through 2001. She had studied with accomplished painters at the NYC National Academy and was elected to the American Artists Professional League, Life Fellow, and the Miniature Painters, Sculptors and Gravers Society of Washington, D.C. Her work was shown in several Worldwide Exhibitions of Miniature Art, including at The Smithsonian in 2004.

Maude was treasurer of the Pemaquid Art Gallery, Pemaquid Point, for several years, and her work is now exhibited in The Saltwater Artists Gallery in New Harbor. She was also active with Archipelago in Rockland and The Maine Art Gallery in Wiscasset. Maude was an enthusiastic teacher of watercolor, calligraphy and drawing for many years up to the recent present in the Maine midcoast area.

In her earlier years, while she was married to her first husband, Ken Thompson, she painted under the name of Kendall Thompson, and specialized in portraits in oil. She changed to her current professional name of Maude in the 1960s when she married her second husband, and switched her medium primarily to watercolor. She had become quite a fan of Andrew Wyeth, hence her being drawn to Maine. Maude, and her photographer husband, William Randolph Olsen moved to Friendship in 1974, and then later to South Bristol in 1986. They had their own business entity called Maude Randolph Graphic Enterprises.

There is so much more to Maude’s life, but there is only so much space! We, her family, would like to invite all of you to a celebration of her life on Sunday, Sept. 29, at 2 p.m. at the Union Congregational Church in South Bristol. Please come and share a sweet memory of your own about our beloved Maude.

Arrangements are under the direction and care of the Strong-Hancock Funeral Home, 612 Main St, Damariscotta. Condolences, and messages for her family, may be expressed by visiting StrongHancock.com.