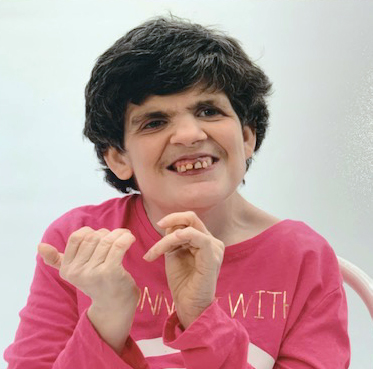 Joanna Leigh Rubenstein, 51, died on Oct. 6, 2022. Joanna died comfortably at her home after a lifelong struggle with Rett syndrome. Rett syndrome is a rare neurologic and developmental disorder which expresses itself early in infancy and results in a severe loss of cognitive and physical functioning. She lived at 4835 Somerville Street in the Stanton Heights neighborhood of Pittsburgh, Pa. She was attended by her nurse and caregiver.

Throughout Joanna’s life, she was dependent on others for her personal care. For 48 years that care was provided by specially trained professionals in three different facilities. In 1975, she was admitted to the Erie Infant Home & Hospital in Erie, Pa. In 1976, she moved to a group home on Negley Avenue in Pittsburgh operated by Horizon Homes. Through a consolidation and name change, Horizon Homes subsequently became Mainstay Life Services. Joanna remained a client of Horizon Homes/Mainstay for the next 46 years spending her last years in the supervised living facility on Somerville Street.

Joanna is survived by her father, Daniel F. Rubenstein, DMD., of Pittsburgh; her mother and stepfather, Kathleen and Rob Flory, of Walpole; by her brother, sister-in-law, niece, and two nephews, Brian, Sally, Ryn, Will, and Fritz Rubenstein, of North Hampton, N.H.; a half-brother, Brendan Brown of Pittsburgh; and numerous aunts, uncles, cousins, and loving caregivers.

Funeral arrangements are being handled by Ralph Schugar Funeral Home on Centre Avenue in Pittsburgh (412) 621-8282. Visitation at the funeral home will be at 10 a.m. on Friday, Oct. 14, with a funeral service to follow at 11 a.m.

In lieu of flowers, donations to Coastal Kids Preschool are encouraged, 12 Jackie’s Trail, Damariscotta, ME 04543.