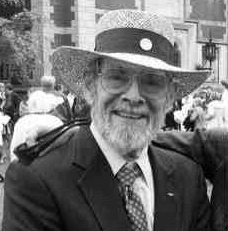 Joel Howard Graham, 89, of Damariscotta, passed away on the most beautiful Maine day – July 23, 2022 – in Boothbay Harbor after a long journey with Alzheimer’s.

Born in Hartford, Conn. on Nov. 20, 1932, Joel was the ultimate lifelong learner. While growing up, he developed a Thoreauvian appreciation for the outdoors; hunting and fishing the woods and streams of Connecticut. He was a voracious reader of anything, his curiosity stretched from a 50-year devotion to Scientific American magazine to the ritual of the Sunday comics. Erudite without self-importance, he loved the sly sarcasm and societal criticism hidden in the funny papers.

Joel distinguished himself early academically, earning a scholarship to attend the Loomis School, and graduated with honors in 1950. He was offered a scholarship to Yale University but instead chose Bowdoin College, where he fell in love with the natural wonder of Maine. This decision would resonate throughout the rest of his life.

He married Nancy J. Tierney in 1955 and the next year started two additional lifelong loves: fatherhood and an officer’s commission as an aviator in the United States Navy.

Commander Graham served 27 years on active duty including three tours in Vietnam aboard the USS Coral Sea. After earning a master’s at American University, he taught Marine Warfare at the Naval War College in Newport, R.I. The commander was stationed at flight squadrons on Whidbey Island, Wash.; Rota, Spain; Alameda, Calif.; and finally, Lakehurst, N.J. When his fighter pilot wings were clipped, he still had the need for speed and he took up competitive road rallying and Porsche racing – including serving as the president of the New England chapter of the Porsche Club of America.

Once retired, Joel and Nancy purchased Salt Meadow Farm on the Damariscotta River, situated on 15 acres, overlooking a salt marsh. The surrounding meadows were filled with wildflowers, waterbirds, and plenty of privacy and quiet. Both Joel and Nancy adored their years in Maine, often wondering why they waited so long to move to the place with the motto “The Way Life Should Be.” Joel was a regular at Skidompha Public Library and could often be found reading on the expansive porch he had built at Salt Meadow Farm, drinking an excellent cup of strong coffee with heavy cream and far too much sugar, and snuggling with at least one standard poodle curled up next to him. A gentle man with elegant manners, a kind word for everyone, and unparalleled wisdom, Joel quietly made the world a better place. The commander officially retired with Nancy and his two daughters at his side.

In addition to Nancy, his wife of nearly 67 years, Joel is survived by his daughters, Vanessa Benya, of Los Angeles, Calif., and Jennifer Billings, of Marblehead, Mass.; his six grandchildren, Emily and Julia Graham, Phoebe Benya, and Graham, Sawyer and Henry Billings. He is also survived by his four siblings, Peter Graham, of The Villages, Fla., Linda Kurr, of Windsor, Conn., Michael Graham, of Windsor, Conn., and Charles Graham, of Suffield, Conn. He was predeceased in 2014 by his son, Jonathan Graham, of Bethesda, Md.; and his grandson, Hunter Benya, of Los Angeles, Calif. in 2018.

A grand celebration of Joel’s life will take place in Suffield, Con. at the home of Charles and Jean Graham at 12 p.m. Saturday, Oct. 1. Please consider a donation in Joel’s name to one of the organizations that Joel served, frequented, and treasured: The Robert Potter League for Animals, potterleague.org, in Middletown, R.I.; or Skidompha Library, skidompha.org/support/donate, in Damariscotta.