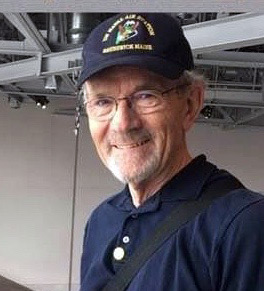 John Colby Chapman died at his residence at the Highlands Thursday, May 7, 2020.

He was born in Damariscotta on April 10, 1940, the son of Dorothy and Walter Chapman. A 1962 graduate of Colby College with a degree in business administration, John attended the U.S. Naval Officer Candidate School in Newport, R.I. He spent four years in active duty, attached to the Airborne Early Warning Wing, and on the USS Wasp during the Vietnam War. He spent 24 years in the Navy Reserve and retired with the rank of captain in 1991.

John was an independent insurance agent at Chapman & Chapman Insurance in Damariscotta, where he also sold real estate. Most recently, he specialized in financial insurance applications for Bilodeau Insurance in Brunswick. He served as a board member of Lincoln Academy where he was president for two years. John was a 50-year member of Rotary International and recently was awarded honorary membership in the Brunswick Rotary Club. He truly exemplified “Service Above Self.”

John was a great example of his generation – the silent one. He often was quiet but lived by his actions which were always fair and reliable. He was generous to a fault.  He was frugal in his own life, but he’d give you the shirt off his back. John had a sly and dry sense of humor and was an inveterate tease, making one wonder if he was really serious. John loved Damariscotta Lake. He was the captain of his party barge, launched from the shore in front of the family cottage.  He equally loved their house in St. Augustine, Fla. which he designed. On Aug. 3, John and his wife Allison (Ladd) celebrated 28 years of love, laughter, and adventures.

To honor John, you are encouraged to order something from an infomercial and take advantage of the 30-day money-back guarantee; reply “just as ugly as ever” when asked how you are; have breakfast with a friend or two on a Saturday; or go on a long walk and forget your phone.

When it is possible to gather, a date for celebrating the life of this remarkable man will be shared.

Condolences to the family may be expressed at brackettfh.com.

If so moved, memorial contributions may be made to the Brunswick Naval Museum and Memorial Gardens, 178 Admiral Fitch Ave., Brunswick, ME 04011; or to the Kiersten Woodward Memorial Fund, 8326 Haggard Ct., Martinsville, IN 46151.