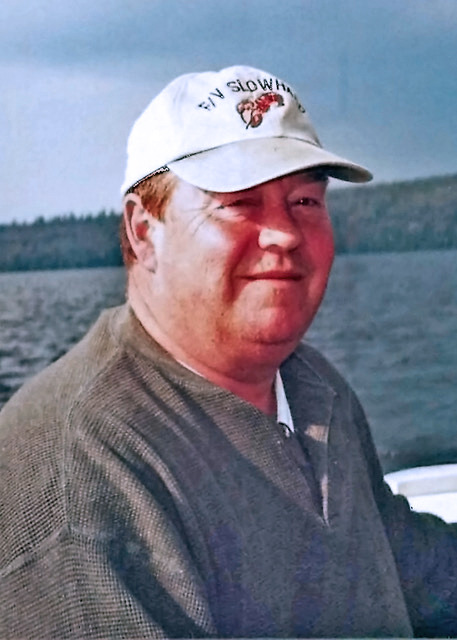 He attended Bristol High School and then Lincoln Academy, graduating in the class of 1968. He met the love of his life, Betsy Austin of Gasport, N.Y. while she was summer vacationing in Round Pond. They fell in love and began a long distance relationship. One time he missed her so much, he hitchhiked from Bristol to New York to visit her at the age of 17 in a freezing rain storm.

As a teenager he hauled lobster traps by hand from a skiff out of Round Pond Harbor, which began his love of being on the water. After high school, he began his career at Maine Yankee Nuclear Power Plant during its construction in 1972 until the plant was closed in 1996. He made many lifelong friendships while employed there. After Maine Yankee closed, he decided he wanted to be back on the water. He purchased a lobster boat and named it “Slowhand” and pursued his love of being on the ocean and went lobstering and enjoyed tuna fishing.

He enjoyed hunting with his family “The Legal Beagles,” fishing, camping, playing horseshoes, golfing, cookouts, and his weekly poker nights with great friends. He was a huge Patriots fan, and always had to wear his lucky Patriots shirt whenever a game was on.

He enjoyed attending all of his grandchildren’s sporting events and any family gathering. When he wasn’t working, in the woods, or ice fishing, he enjoyed being in his garage woodworking and repairing things. He loved any type of project he could get his hands on. Whether it was for work, fun, or helping a friend with anything, he would do it without hesitation. That generous and selfless spirit was put to the test, when as a teenager he saved an entire family by pulling them from a burning car in Round Pond.

Besides his parents, he was predeceased by his daughter, Shelly; and his beloved dog, Emma.

A celebration of life gathering for Craig will be held from 5-7 p.m. on Monday, Feb. 10 at The Harbor Room, 2477 Bristol Road in New Harbor.