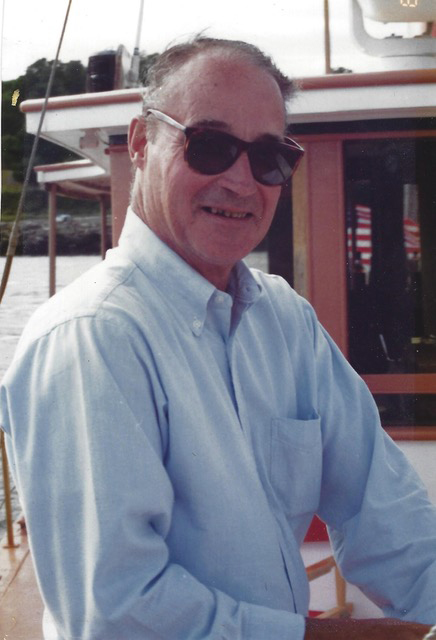 John D. Buckingham Jr., 84, passed away peacefully at his home Dec. 14 surrounded by his loving family. He had fought prostate cancer for many years using all the latest treatments he could, and was grateful that he was able to gain some extra time.

John, known as Jack, was born in Mont Clair, N.J. on Jan. 21, 1933. His parents were Constance and John Buckingham of Bedford Village, N.Y.

During WWII Jack and his family moved to Arizona where his father served as the “commandant of cadets” at Luke field. While there Jack enjoyed raising rabbits and pigeons. His education though was lacking, so after the war his parents sent him to the Taft School in Watertown, Conn. which he loved and made many lifelong friendships.

After graduating from Taft, he entered Middlebury College in Vermont where he met his future wife Lexie. He graduated from Middlebury in 1958, but before that he and Lexie married in 1954 and then went to Guantanamo, Cuba for a year while he finished his Navy service, as an aerologist.

While in Cuba, they decided to take a month’s leave and travel from Guantanamo to Havana in an attempt to see as much of Cuba as possible. They went in and out of many small towns where the Cubans welcomed them into their homes. The people were extraordinary friendly and extremely generous. The food was wonderful.

Along the main route to Havana, they were accosted by a gang of Castro’s soldiers who had been hiding in the hills. They asked for papers which Jack handed to them (upside down), they read the documents (upside down), and handed them back (upside down). Jack and Lexie tried not to laugh as they looked so serious reading the papers (upside down). Eventually the soldiers let them go, no worse for wear, and more amused than frightened. A few years later, of course, Fidel Castro had ousted Batista.

After his stint in the Navy, Jack and Lexie returned to Middlebury in 1956. Lexie worked for the college while Jack studied for his degree and graduated two years later. That was a wonderful and happy time for them. Jack then decided he wanted to go into corporate business.

In 1961 while living in Rye, N.Y. twin boys Jim and David were joyfully added to the family. After a few more moves they ended up in Boxford, Mass. and remained there until Jack retired, and then happily moved to Maine where they built a house which they have lived in for 30 years. He loved golf, boating and eventually gardening. He was on the board of Wawenock and treasurer for nine years.

Private services will be held at the convenience of his family.

Spring interment will be in the Harrington Cemetery, Bristol.

In lieu of flowers please consider donating to the Wawenock Golf Club, 685 State Route 129, South Bristol, ME 04573, or to a charity of your choice.