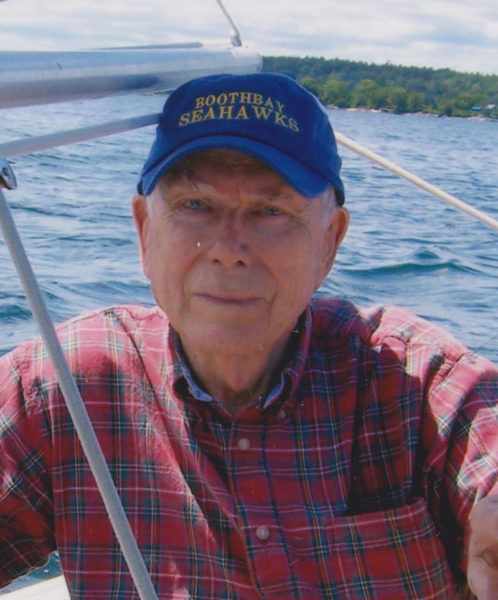 John Davenport Walton, of Boothbay Harbor, passed away on March 5.

He was born in Glen Ridge, N.J. on Aug. 16, 1921 and graduated from Dartmouth College in 1943. He then served in the U.S. Navy from February 1942 until December 1945 sailing on submarine chasers in Puget Sound and guarding the Panama Canal. During the war he married Frances Arentz of Short Hills, N.J. After the war he began working for the General Electric Company and retired after 38 years, most of them in Louisville, Ky.

He was widowed in 1957 and then married Elizabeth Wood in 1960. They were happily married for 46 years.

After retirement, John and Betty were able to spend summers at the family’s cabin in Sprucewold, Boothbay Harbor which was built by his grandparents in 1924. There he was able to continue his passion for sailing and being on the water. When he couldn’t be sailing, he loved woodworking and made special pieces for every member of the family. This gave him an outlet for his love of drawing and design. Earlier in his life he designed and built his first house and modified every other house in which he lived.

In 2000 they moved permanently to St. Andrews Village in Boothbay Harbor where he continued to live after his wife’s death in 2006. He moved to Whitefield in 2011 to live with his daughter and returned to Assisted Living at St. Andrews where he passed away peacefully with his family around him.

A private memorial service will be held.

In lieu of flowers, donations may be sent to The Boothbay Region Land Trust, bbrlt.org.