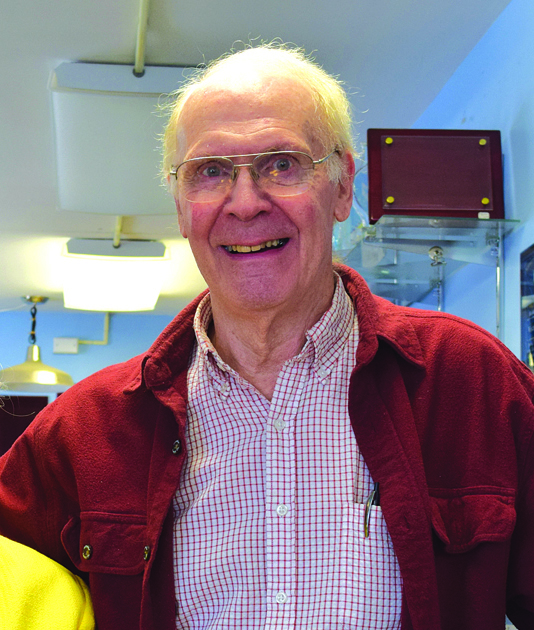 John Day, 83, of Jefferson, breathed his last breath holding the hand of his much-loved wife, Ellie, on June 24, 2020. He was a wonderfully thoughtful and caring man, who, although not a religious one, was devoted to the belief of living his life based on humility, integrity, and kindness. His quiet demeanor was charged with a wicked sense of humor which made him such fun to be around.

He was born in New Rochelle, N.Y. on May 6, 1937, to Stanley and Helen Day. In 1953 the family moved to Winchester, Mass., where he graduated from Winchester High in 1955. Inspired by his first Erector set, he designed and operated many innovative and unique contraptions, which led to his decision to become a mechanical engineer. He learned to be a draftsman in high school and spent two summers working in that capacity at the Sanborn Company, which manufactured medical diagnostic apparatus. He enrolled in the University of Maine in Orono, where he received his mechanical engineering degree in 1959. He was a proud Phi Kappa Sigma member and has enjoyed seeing fellow fraternity brothers at their gatherings over the past number of years. He had a wide variety of outrageous stories to tell about the wild winter carnivals and his ice-carving productions.

He met Ellie in 1958 at homecoming weekend when she was someone else’s date – and the rest is a wonderful love story of working side by side in several different enterprises and locations over the past nearly 60 years. Ellie was the cautious one of the two who was less likely to take on the unknown as John welcomed the challenges and risks as he took her along on their ride of a lifetime.

John began his engineering career at United Aircraft, Sikorsky Division, in Connecticut and moved on to United Shoe Machinery in Beverly, Mass. In 1962, he and Ellie purchased an old home in Manchester by the Sea, Mass. because it was the least expensive house available, at $9,000, that John felt was fixable. The next 13 years were spent there raising three kids and rebuilding that house. John was an amazing jack-of-all-trades, and he had his two boys working beside him handling tools at an early age. He was proud that he had influenced their lives in such a practical way, hoping they would adopt that work ethic and skill set, as indeed they have.

While at United Shoe John was recruited to design and build a plant for producing a synthetic shoe upper material to compete with Dupont’s new Corfam product. He was issued several patents in the process and became an expert in the polyurethane field. This led to his next position at a Baltimore firm where he eventually became the vice president.

The family first moved to Pasadena, Md., where they purchased a ranch house overlooking Chesapeake Bay which soon was transformed into a two-story home designed by John. That house was sold in 1977 and the opportunity to provide a new and exciting environment for the three kids came in the form of a huge, shabby, brick historic farmhouse on 13 acres in Westminster. The house was destined for bulldozing, but John and Ellie saw the possibilities and were eager for a new and creative project together.

John commuted an hour to Baltimore and back as a plant manager by day and home restorer and farmer on weekends. It became a true family adventure. The kids all participated in 4-H, showed cattle, and rode horses, then helped with the many home and farm chores. Baling hay became a festive occasion for the whole neighborhood with a traditional stop under a mulberry tree for berry picking and a picnic on the big front porch. Those were magical days for the whole family.

John’s most exhilarating farm experience was delivering a breech- presenting calf in a February snowstorm. His untested skills as veterinarian proved successful after trying to turn the calf for about an hour. He claimed that he gained his education in husbandry by watching “All Creatures Great and Small” on PBS. Ellie’s part in the event was limited to helper when he ordered, “Just hold the damn cow still.” As the kids grew and moved on, John and Ellie managed a small Angus cow and calf herd for several years.

In 1986, the authentically restored farm and outbuilding complex was listed on the National Register of Historic Places and featured on a Maryland House and Garden Tour. By then John had become tired of the corporate life and felt he needed to feed his hunger for becoming a business owner. John and Ellie packed up one more time and were off on another adventure. After extensive research, he and Ellie purchased Colby Hill Inn in Henniker, N.H. With 16 rooms, a large public dining room, and a big staff, it was the challenge he craved. How he loved that. He entertained the guests with his humorous tales and especially enjoyed his partnership with daughter, Laurel, who became a very essential and important part of the business.

After 10 years at the inn working 24/7, John said that he was ready to wind down. Another move ahead! The inn was sold in 2000 and the couple went to their favorite place in the world – Midcoast Maine – where retirement was the plan.

After six months he became restless and bored so he and Ellie created Days Emporium, a country gift store in Newcastle. As the economy changed they downsized the operation to build up the engraving part of the business, which was growing, enhanced by John’s engineering and graphic skills. Again, Ellie was his somewhat reluctant partner because she really liked the idea of retiring. However, Emporium Engraving was born at the bottom of Academy Hill, and John carried on.

The business grew and he continued to enjoy leaning on the counter, exchanging tales with fellow business friends and his many satisfied customers who returned again and again for his services. His reputation as an engraver who could engrave almost anything that others wouldnt dare to take on spread and he had quite a fan club statewide.

He was finally ready to retire to the home he had designed on Damariscotta Lake. It was the first new house Ellie and John had ever owned. Until 2001 he had restored or rebuilt every home they lived in. He would always claim that his children had been raised in broken homes.

John had been diagnosed with Parkinson’s disease 12 years ago and he carried on well through all the gradual progressions of the disease by keeping active and cheerful. He was an enthusiastic member of the CLC YMCA in Damariscotta and greatly appreciated the Parkinson’s activities available to him, especially the boxing program.

He spent much of his retired time working in the fine natural shade garden he had created and he was gratified by being awarded a LakeSmart Award by the Midcoast Conservancy.

John was doing well until suddenly, without much warning, he became very ill on June 14 and was rushed to LincolnHealth – Miles Campus where he was diagnosed with pneumonia and anaplasmosis, a serious tick-borne illness. With all he had accomplished in his battles to stay fit, he was brought down by a tiny, unseen tick.

John will be sadly missed by those who loved him, but his finest attributes sparkle in his sons, John and Matthew, daughter, Laurel, and his four wonderful grandchildren, Tim, Sam, Hugo, and Maggie. They were his greatest treasures and a source of his happiness and pride.

He also leaves his two dear daughters-in-law, Tessa and Laura, of whom he was very fond, and he was glad that they have learned to tolerate and laugh at the antics of “Those Day Boys.”

Ellie will forever miss him smiling at her side, but knows that he’ll be waiting somewhere to take her hand and share another wonderful adventure together.

John was very explicit in what his last wishes would be when the time came. In typical, quirky John style, he requested that his final sendoff from Earth be a happy occasion, as had so many of the Christmas in July events the family spent together, with lots of laughing, food, and fun. He asked that this grand finale take place when Ellie can join him for their final adventure into the unknown. He would like their combined cremated remains to be blasted to who-knows-where to do who-knows-what from a good old Maine potato gun for a final big bang with his family to celebrate two lives well lived.