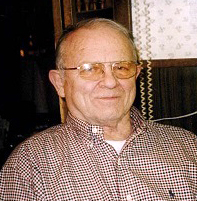 John Parker Holloway, 87, passed away unexpectedly on Nov. 29 in Ellsworth. He was born Dec. 14, 1929 in Portland, the son of Cedric Peak and Norma (Young) Holloway.

John graduated from Camden High School. He served honorably in the U.S. Air Force from 1947-1951. He was promoted to the rank of Sergeant as a Flight Engineer. He served during the Korean Conflict and participated in the Berlin Airlift.

On Dec. 14, 1952, he married Janet M. (Benner), formerly of Nobleboro and a 1948 graduate of Lincoln Academy. They lived in several different towns in Maine and then finally made their home in Bar Harbor. John began working at the Atlantic & Pacific Tea Company in 1962. The A & P relocated and he worked for the new company, H & H Grocery Store. He worked as a meat manager until 1984. After retirement John worked as a caretaker for estates on West Street. He enjoyed perennial and vegetable gardening.

John was a member of the Holy Redeemer Catholic Church, Knights of Columbus, both of Bar Harbor, and served as a reserve police officer for the Bar Harbor Police Department. John loved his garden at his home and enjoyed hunting and fishing as well. He enjoyed traveling and visited North Carolina, Alabama, Hawaii, New Orleans and Alaska.

Contributions in John’s memory may be made to the Holy Redeemer Catholic Church, Construction Fund, 21 Ledgelawn Ave., Bar Harbor, ME 04609; or the SPCA of Hancock County, 141 Bar Harbor Rd., Trenton, ME 04605.

Condolences may be expressed at www.jordanfernald.com.