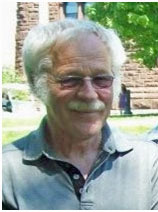 John Turner Fish passed away at home in Windsor on May 17, 2019 with loved ones at his side. John had a long four-year battle with small cell cancer.

He was born on June 25, 1948 in Damariscotta, the first born of twins. John was the son of Miles Amos Fish Jr. and Melissa (Turner) Fish. He was raised in Jefferson and graduated from Lincoln Academy in 1966.

John joined the Air Force shortly after graduation and did two tours in Vietnam.  After discharge, he worked for the Maine Dept. of Education. John began working for the U.S. Postal Service in 1987, first in Winthrop and then in Gardiner. He delivered mail in Gardiner, Randolph and Farmingdale for 27 years until retiring in 2014.

John loved friendly competition, particularly when playing cribbage. He was still playing until a week before his death. John also enjoyed rummy, bridge, and golf!  He loved the yearly golf trip south with the guys, playing 36 holes daily.  He was an avid music lover, especially Bob Dylan.  John was also very proud to have more than 33 years of sobriety.

He was predeceased by his parents; his brother, Robert Fish; and his beloved son, Brandon Fish.

John is survived by his wife, Nancy (Walker) Fish and their children, Jason Walker of Portland, Troy Fish of Portland, and Heather Wasik and her husband Paul of Washington, DC.  John has four sisters, Catherine Walker of Jefferson, Marjorie Baldwin and husband Bob of Nobleboro, his twin Joan Jackson of Jefferson, and Nancy Pierce and husband Lynn of Jefferson.  John is also survived by many nieces and nephews, brother-in-law, Fred Jackson of Brooks, and special friends, Mark Luken and Ken Billups.

In lieu of flowers, the family asks you make a donation to the charity of your choice.