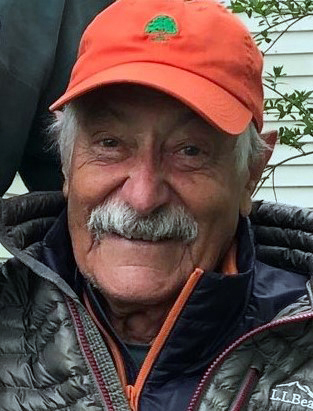 Joseph Herbert Carusone, 88, of Walpole, passed away peacefully on Dec. 27, 2020 in his home surrounded by family.

Herbie was born in Greenwich, Conn., to Joseph H. Carusone and Hildur Weber Carusone, on Dec. 1, 1932. His family soon moved to Westport, Conn., where his father opened the Mayfair Market grocery store. He loved to work in the market with his father, who called him Sonny. The market was on the corner of Post Road and Riverside Avenue near the Saugatuck River, and when his father would give him a break from work, you would find him fishing in the river, catching snappers or crabbing for blue crabs.

He graduated from Staples High School in 1951 and started serving in the U.S. Navy prior to graduation. Because of his early departure to the U.S. Navy, his mother received his diploma for him at the high school graduation ceremony. He served four years in the U.S. Navy, which included a Mediterranean Sea deployment aboard the USS Tidewater, and was awarded the National Defense Service Medal.

During his years in the Navy, he would send a portion of his pay back home to help his parents and keep enough money to buy U.S. savings bonds to build a reserve. His thriftiness started at an early age and was a hallmark of his life. Upon his return to Westport, he joined his dad in the grocery store and worked alongside his younger sister, Pat, and his best friend, Ray Bowne.

In 1964, he joined the Westport Fire Department as a paid, full-time firefighter following in his grandfather’s footsteps who had served as a volunteer in the same fire department. When he was away from the fire department, he enjoyed fishing, clamming, and lobstering in Long Island Sound with his family and friends. He also enjoyed working a second job painting houses for a local builder. Ultimately, he used his construction skills to build a house in Weston, Conn., acting as general contractor. Herbie loved the camaraderie and excitement of serving the local community and retired from the Westport Fire Department as a lieutenant in 1986 with 22 years of service.

After sailing up the New England coast with his friends, Herbie decided to move to Maine in 1986 where he discovered a slower pace of life in the quaint town of Wiscasset. In Maine, he started using his first name and was known as Joe to all his friends and family there. This is also where he met and married the love of his life, Janis Breen Warsky, on July 15, 1991. Joe frequented auctions to find that diamond in the rough that he would refinish and sell in his shop, Wiscasset Cottage Antiques. His beautiful workmanship was like that of a bygone era. He especially loved talking with people, and the antique shop provided him this opportunity every day, which brought much joy to his life and to the lives of those whom he met. He enjoyed sharing his treasures with them and seeing his repeat customers year after year, many of whom became friends. This past summer, at 87 years old, Joe worked in his antique shop as much as he could; not because he had to, but because he loved to. When he wasn’t there, Joe enjoyed catching stripers in the Sheepscot River, was an avid collector of antique household items, and renovated several houses throughout the Wiscasset area over the years. He could also frequently be found at the shop across the street having tea with his friends on Saturday afternoons.

More than anything Joe loved being with family and friends, having large family dinners, and chatting with his kids and grandkids. Recently he found joy in sitting on the patio with Jan, simply watching the waves crash onto the rocks at Pemaquid Point.

Joe’s family wishes to extend our sincere thanks to the many doctors and nurses who provided Joe with exceptional care and love.

In lieu of flowers, donations can be made in Joe’s name to MaineHealth Care at Home, c/o Roy Garland, 15 Industrial Park Road, , Saco, ME 04072, tinyurl.com/y3zbwo66.

There will be a special day of remembrance so that we can gather to celebrate the life of Joseph Herbert Carusone in Connecticut and Maine during the summer of 2021.