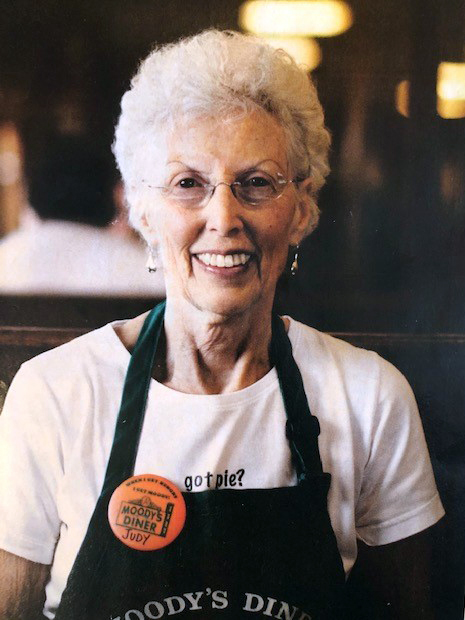 Judy Beck passed into the presence of her Lord Jesus, where there is “fullness of joy and pleasures forevermore (Psalms 16:11),” peacefully at home on Dec. 17, 2020. She was 81.

Judy was born May 4, 1939 in Waldoboro. She loved Jesus and her eternal hope rested in Him. She was the eighth of nine children born to Percy and Bertha Moody. She was a graduate of Waldoboro High School and she also received a degree from Fisher Junior College in Boston, Mass., where she studied to be a medical secretary. After college, she worked in Boston at Brigham & Women’s hospital. Most of her working career was spent as a waitress in various restaurants in Connecticut, but most notably she was a server and dining room manager at Moody’s Diner in Waldoboro. She loved her work, her co-workers, and her family legacy.

She was the beloved wife of her husband, Robert Arthur Beck, for 59 years (60 this February), mother of four, grandmother of 14, and great-grandmother of 25. While raising her children, she sang in the choir of First Baptist Church in Enfield, Conn., taught junior high girls Sunday school, and led various Bible studies. She spent a few summers volunteering in the kitchen at Camp Northfield in Northfield, Mass.

Upon returning to Maine in 1987, she enjoyed being a part of the Schooner Town Cloggers and the Steppin’ Out Cloggers. She and Bob were regular attendees at North Nobleboro Baptist Church. She enjoyed walking the Florida beaches and collecting shells, playing card games, watching the Celtics … even better was watching her grandkids play sports, doing her nails, and enjoying the summers on Damariscotta Lake by her pool with her kids and grandkids.

As a young woman she was part of the Waldoboro Trio. She and the other members of the trio won a trip to the Ted Mack radio show in New York City, where they competed on the radio. She was featured in Episode 5 of a 2013 documentary series produced about the East Coast of the United States. Episode 5 included Maine and a segment featuring Moody’s Diner. This has aired throughout Europe. A story was also written in 2011 for Yankee magazine featuring Judy entitled, “How do you keep smiling for 50 years?”

Memorial donations in lieu of flowers can be made to either Joni and Friends (a disability ministry), P.O. Box 3333, Agoura Hills, CA 91376-3333, joniandfriends.org; or Camp Northfield, 96 Wanamaker Road, Northfield, MA 01360, campnorthfield.com.

Friends are welcome to a walk-through visitation at the First Baptist Church of Waldoboro (71 Grace Ave., Waldoboro) on Tuesday, Dec. 22 from 5-7 p.m. A private family burial will be held at the Rural Cemetery in Waldoboro.

A memorial service to celebrate Judy’s life will be held in the late spring or early summer of 2021.