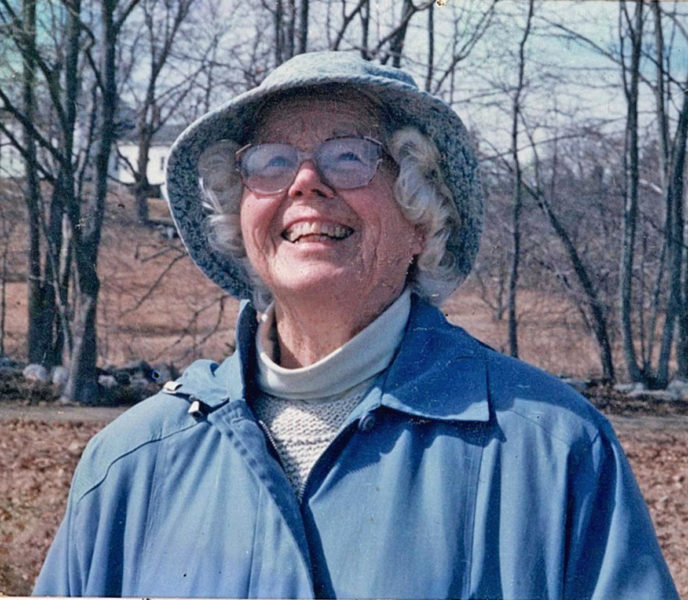 Julia Booth Myers, 98, died on Sept. 22 at her home at Schooner Cove in Damariscotta, surrounded by members of her family, after a short illness. She was born in New York City, Christmas Eve of 1917, to Walter C. and Lillie Fraser Booth.

Julia graduated in 1936 from the Todhunter School (where she had taken courses in civics from Eleanor Roosevelt), and from the Child Education Foundation in 1938. Trained as a Montessori teacher, Julia first worked for the Nightingale-Bamford School in New York City. Much later, she taught for 10 years in the Special Education Department of the South Bristol Elementary School, as well as serving for 10 years on the South Bristol School Committee. She also served on the [Maine] State Advisory Committee on Education under then-Governor Edmund Muskie.

Julia was a life-long lover of salt water, swimming daily in the Damariscotta River well into her 80s. She also cross-country skied at every opportunity, and was an active member of the Brunswick Skating Club as well as skating with great joy on local ponds – including one dug for the purpose next to her home, christened “Lake Julia.” Earlier, she was an enthusiastic ballet student of Ysobel Russell, and took part in Russell’s annual ballet productions. Though not an enthusiastic sailor, Julia was an able mate and became as competently reliable afloat as ashore.

In 1949, she and her husband, Edward A. Myers, established Saltwater Farm, a mail-order seafood company in Damariscotta, and she served as an officer of that company until 1971. She also assisted in the management of Saltwater Farm Pier, a restaurant the parent company established in 1960 after restoring the Cottrell Wharf (now Schooner Landing).

Myers was a trustee of Miles Memorial Hospital for many years, and also of Weymouth House; she was a member of the Advisory Board for the Round Top Center for the Arts; a deaconess of Union Church in South Bristol, and one of the first volunteers trained for Hospice. She volunteered in patient-service at Miles, and served on the Hospice Advisory Board.

In 1982, Julia co-founded a local peace organization, Citizens Opposed to Nuclear Arms [CONA], now Citizens Offering New Alternatives. She served two terms as president, and continuously as a board member until 2006.

In 2002, Julia and her husband moved into Schooner Cove, on the Miles Hospital campus. Julia was active throughout her years there as a greeter, as a member of the music committee, and as the official resident representative to the Board of Trustees.

A consummate and inventive cook, Julia engaged with her late husband’s last venture into mussel aquaculture by serving a variety of mussel dishes to the public on Fridays at the couple’s home in Clarks Cove, Walpole. Then-Governor Angus King honored her as the “Mother of Maine Aquaculture.” She was an early advocate of organic foods (some of which she obtained by mail order long before such were generally available), and she was an avid vegetable gardener. She loved flowers as well, and her terrace garden at Schooner Cove was a source of constant delight and attention.

Julia loved her large family, and parented three sons and a daughter. She is survived by son, Winslow of Bristol and partner Patti Bradley, and Winslow’s daughter Anna Myers of Newcastle; Allen and wife Alice Hildebrand of Brooklin, their sons Eben Myers and wife Laura and two daughters Lucy and Sadie of Pittsburgh, James Hildebrand and wife Emily and children Jack and Kate of Orono, Justus Myers and partner Julie Squire of Washington DC; and Thomas and wife Quan of Clarks Cove and his daughter Mistral Myers of New York City and her fiance Leah Quintiliano; Felicity and husband Brian Robbins of Nobleboro, and his children Jessica and husband Caleb Carter and their children of Bucksport, Cassie and husband Devin Gross and their children of Sedgwick, and Jeremy Robbins and his wife Autumn of Blue Hill, and stepdaughters Jessica and Emma Creighton.

In lieu of flowers, friends may contribute to the Damariscotta River Association or to Miles Memorial Hospital, or to the charity of choice.