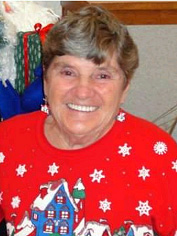 She was born in Exeter, N.H. on June 21, 1935, the daughter of Frank and Thelma (Seavey) French. She moved frequently during her childhood years, but settled in Wiscasset in 1952, where she met Charles Caton. They were married on June 21, 1954 while he was on leave from the Navy.

June had a variety of jobs over the years: apple picking for 21 years at orchards in Wiscasset, Walpole, Damariscotta, and Dresden; worked at local restaurants in Wiscasset; self-employed lawn care; and seasonal work at a local seafood market.

She was predeceased by her husband of 57 years, Charles, in 2011; her parents, Frank and Thelma French; sisters, Arline Davis and Pauline York; brothers, Bob Seavey, and Donald French; and beloved sister-in-law, Virginia Gavett.

June is survived by her daughters, Terrie Banker of Wiscasset, and Linda McKeen and husband James of Topsham; grandchildren, Michael Thompson and wife Heidi of Rockwood, Tenn., Jason Banker of Augusta, Jamie Wade and husband Rob of Vassalboro, and Kacy Gold and husband Clint of Wiscasset; great-grandchildren, Hannahmarie Thompson of Rockwood, Tenn., Kassidy, Alana, Robbie, and Declan Wade of Vassalboro, and Acacia and Elincia Gold of Wiscasset; sister, Mae Santos of New Gloucester; and many nieces, nephews, and dear friends.

There will be a graveside service at Woodlawn Cemetery in Wiscasset in the spring.

In lieu of flowers, donations may be made to the Newcastle/Alna Baptist Church, 254 Head Tide Rd., Alna, ME 04535.