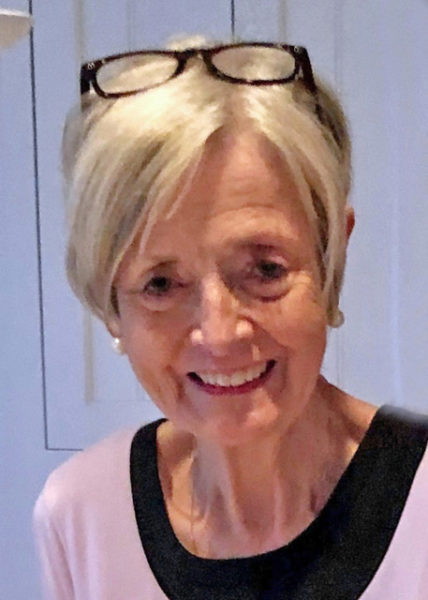 Kathy grew up in New Jersey, attended local schools, and earned a teaching degree from Seton Hall University in South Orange, N.J. in 1969. While in college, she met her husband George on a blind date, and they married shortly after her graduation. Kathy and George recently celebrated their 50th wedding anniversary.

Kathy and George moved to Maine in 1976 with their two young daughters, bravely following their dream to build a life in the villages of Newcastle and Damariscotta, which they had previously visited.

After building a home for his family on Bunker Hill Road, George established a construction company later known as Hervochon Construction. Together, George and Kathy designed and created homes, vacation properties, and commercial buildings for over 35 years. In 2004, they had the honor of designing and creating the new worship space at St. Patrick’s Church in Newcastle, where they were longtime parishioners.

At St. Patrick’s, Kathy was the first female Eucharistic minister, led the CCD program, and taught religious education on Glidden Street for many years.  Kathy worked at several local schools including Great Salt Bay and St. John’s Catholic in Brunswick. She had an enormous capacity for love, faith in God, and a compassion for others. She was her fullest self when she was with children, using humor and kindness to connect genuinely.

Kathy was known for giving beautifully packaged gifts, accompanied by notes featuring her recognizable one-of-a-kind handwriting which was a work of art in and of itself.  She was brilliantly creative, and her commitment to taking everything up a notch made everything she did uniquely special.

She will be deeply missed by her husband George; daughters, Gwyn of Boise, Ida., Anni Pat McKenney and her husband Chris of Newcastle, and Megan Kleinick and her husband Kevin of Chicago, Ill.; grandchildren, Patrick and Katherine McKenney, and Emmy and Sophie Kleinick; brother, Brian Rogers of Randolph, N.J.; cousin, Billy Mecca of Asbury Park, N.J.; and many friends throughout the community.

A funeral mass for Kathy was celebrated at St. Patrick’s Church in Newcastle on Aug. 20.  She was laid to rest privately at St. Patrick’s Cemetery. In lieu of flowers, donations in Kathy’s name may be made to: Kairos of Maine, PO Box 578, Auburn, ME 04212 to support their volunteer prison ministry.

Arrangements are under the direction and care of the Strong-Hancock Funeral Home, 612 Main St., Damariscotta.  Condolences, and messages for her family, may be expressed by visiting www.StrongHancock.com.