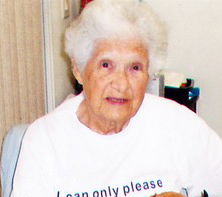 A graduate of Cony High School in Augusta, she worked at the Internal Revenue Service in Augusta until 1951 when she transferred to the National Production Authority in Washington, D.C. until their closing. She then joined the Department of Army in Washington, D.C. followed by Fort Sheridan, Ill., retiring in June 1974. Also in Illinois, Kay worked as a receptionist at a doctor’s office in Waukegan and Abbott Laboratories in North Chicago, retiring in 1986.

Kay loved Maine lobster and spent an hour picking out every bit of meat. When relatives visited her in Florida to help her with household chores, she would say, “Leave it! Let’s play cribbage.”

Kay had an extensive collection of LPs, mostly oldies which she played often. Her favorite performer was Elvis.

Kay is survived by her sisters, Emily Kaune of Nederland, Colo., and Beverly Blair of New Harbor; plus several nieces, nephews and grand-nieces and nephews.

She is predeceased by her husband, Marion Maryan; her parents; brothers, Irvin Bond, and Paul Bond; and sister, Martha Bond Tompkins.

Interment will be in the Bond Cemetery, East Pond Road in Jefferson at a later date.

Arrangements were provided by Roberts of Ocala Funerals and Cremations.