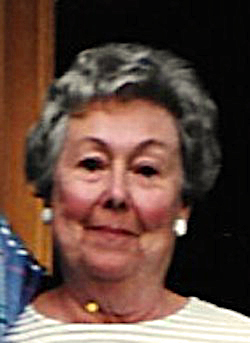 Surrounded by family and friends, Kathryn “Kassie” E. Smith, of Elkton, Md., formerly of Lincoln County, passed away peacefully at home on Oct. 25, 2019. Kassie was born on May 23, 1923, the daughter of Fred E. Hegler and Carolyn Emma (Leyerle) Hegler. Born, raised, and educated in Benton, Ill., she worked as a bank teller there after graduation.

On Jan. 5, 1944, she married James M. Smith, while he was still actively serving in WWII. Once he was out of the service, the young couple began what would be a lifetime of traveling extensively and moving all over the country due to his work at universities as a historian. Kassie worked, too. While they were at Cornell University, she worked at the school’s photo lab, and she did “pick-up” work as a typist for candidates doing their doctoral theses at several universities where her husband taught.

Kassie also worked as a volunteer. For many years she taught Sunday school at Olive Branch Church in Toano, Va. During the years Dr. Smith was at University of Wisconsin-Madison she volunteered in hospitals. And from 1976-1984, while Dr. Smith was Director at Winterthur Museum, Library and Garden, Kassie started a volunteer fund-raising group called “Winterthur Wives.” They operated a hot dog stand during the annual “Fall Fest” and over the years they raised thousands of dollars by selling even more thousands of hot dogs.

Kassie was a strong women’s rights activist and was passionate about the importance of women exercising their right to vote.

She also was proud of being crowned “Queen for an Evening” during the winter of 1946. According to the newspaper clipping she had kept of this event in her young married years, approximately 600 persons attended the “Queen for An Evening” show sponsored by the Danville (Illinois) Saddle Club. The master of ceremonies was Wally Nehrling, a popular radio announcer. He was assisted by two officers of the club. Six judges, chosen at random from the audience, selected Mrs. Kassie Smith as queen out of a group of six women. The queen was awarded the many gifts and prizes donated by local merchants, and each of the remaining candidates received a pair of nylon hose.

Kassie often said that her true enjoyment came from being a wife for 67 “great” years until Jim’s death on March 19, 2012; a mother to her children, Melissa J. Thompson of Newark, Del., and James M. Smith of Elkton, Md.; and a grandmother to Scott D. Thompson (deceased) and Carolyn A. Thompson of Pike Creek, Wilmington, Del. She also loved her dogs and cats, watching the wildlife around her home, shopping, cooking, and entertaining. She was the quintessential “Southern Lady,” gracious, polished, and loved by many.

Remember Kassie with donations to a charity of your choosing.