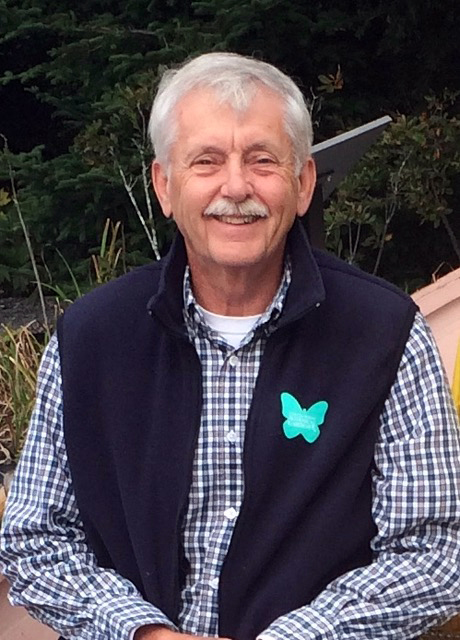 Kenneth Arthur Lutte passed away on April 26, 2022, from Amyotrophic Lateral Sclerosis (ALS, or Lou Gehrig’s Disease) at the age of 75. He was surrounded by his family.

Born on Nov. 20, 1946, the son of Arthur Dale “Flick” Lutte and Polly Pendexter Lutte, Ken grew up in Fryeburg and attended Fryeburg Academy. At a party while attending Bowdoin College (Class of 1969; Chi Psi), he met Pamela Sandblom. They were married in 1968 – before his graduation. Not surprisingly, he had to make up some courses later that summer. They remained inseparable for the next 53 years — making New Harbor their home, raising two sons and hundreds of Christmas trees, traveling the world together, and loving to spend time by any shore with their friends and family.

After graduation from Bowdoin College, Ken took a teaching position at Lincoln Academy – a job he held for the next 35 years. He became beloved by generations of members of the community who had him for sophomore or advanced biology – or for algebra later in his career. He painted houses in the summer and worked as a tax preparer after his retirement. He loved to stay active, both mentally and physically – which made ALS particularly difficult. But he always did his best to stay positive. He lamented that people much younger than him were also stricken with the disease, and how “lucky” he was to have it at age 75.

Ken was happiest with Pam, and when surrounded by his family – particularly while tossing jokes back and forth with his two sons or playing with his grandchildren. He could always be counted on to see all sides of an issue and to inject humor into just about any situation. He never thought of himself as the “life of the party,” but he always was at most gatherings.

Ken is survived by his wife and partner, Pam; as well as his son, Tom and daughter-in-law, Merrily; son, Mark and daughter-in-law, Sarah (Davala); and his beloved grandchildren, Polly and Henry. He was a natural at being a father and grandfather, always available for a game of baseball with Tom, Mark, and their friends — or a game of Jenga with Polly and Henry. He didn’t always let them win.

Ken is also survived by his two sisters, Lonna Lewis, of Fryeburg and Katherine Gallant, of Dover-Foxcroft; and by many nieces and nephews on both the Lutte and Sandblom sides of the family.

A public memorial service will be held, rain or shine, Friday, May 27 at 2 p.m. on the grounds of the Pemaquid Point Lighthouse.