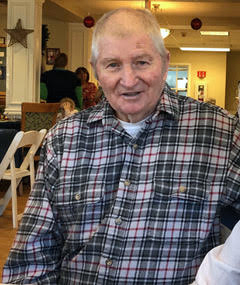 Laurence E. Peaslee Sr., 85, passed peacefully with his immediate family by his side on Jan. 29, 2021 at the Gregory Wing in Boothbay Harbor. He was born March 14, 1935 in Somerville to Guy Peaslee and Leola Benner Peaslee.

He lost his dad when he was only 16 and his mother when he was 55. Laurence grew up in Somerville and attended local schools. He worked with his dad and his siblings on the family farm and in the woods all through his youth. He and his older siblings worked hard to support the family after the loss of their father. He developed a strong work ethic, a trait he made certain to pass along to his own family.

Laurence was a marine worm digger from young adulthood until he retired at the age of 77. He also drove the school bus for the town of Edgecomb for many years. When he wasn’t on the shore he grew Christmas trees and cut and sold firewood. As many will recall, he provided locals with their yearly Christmas tree well into his 80s. Laurence also planted and tended huge gardens every year to make sure his young family had plenty of fresh vegetables on their dinner plates. His kids all had to help weed and tend the garden. Fond memories of farm-to-table far more appreciated in adulthood than as children. Laurence was an avid deer hunter and took great pride in teaching his sons the sport. He loved bowling and participated in leagues for many years. Laurence also loved music and enjoyed playing tunes on his harmonica. He wasn’t much of a singer, but he could yodel with the best of them. He especially enjoyed this to communicate his location to his sons when working in the woods. The family remembers it was music to their ears when he would play his harmonica and yodel while his mother played the piano.

Laurence was an avid cribbage player and welcomed anyone to drop in for a game or two as well as playing with his wife and the rest of the family. Laurence had formed a lasting relationship with his buddy, Bruce, and as they both went through their recovery, they gave each other strength.

Laurence celebrated 37 years of sobriety this year! To say he was an active member of AA would be an understatement. Laurence worked his program, shared his story, sponsored and helped many people on their road to recovery through AA. He studied the Big Book and was a reflective and prolific writer, journaling daily.

He will be remembered as a strong, kind, and giving man. Laurence had a very giving heart. His helping hand was always open, often meeting the needs of others even before his own. Some may think of him as a man of few words, but those who knew him best will tell you it was his actions that spoke for his beliefs and convictions. He conveyed many important life lessons through his day-to-day actions. Family is most important, hard work pays off, honesty is the best policy, be kind and be grateful. Those who knew him well hold him in high regard for showing gratitude, being humble and kind.

A graveside service will be held at the North Edgecomb Cemetery in the spring, date to be announced.