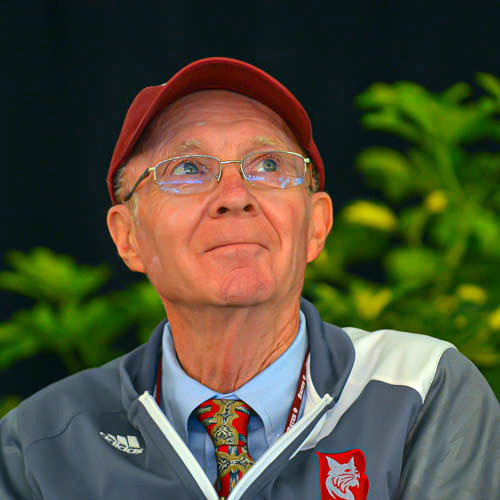 Leigh graduated from Wiscasset Academy and Bates College. After college, he was drafted into the U.S. Army and served during Vietnam, where he received several commendations. Leigh began working at Bates College in 1973 and remained there for 39 years, retiring as the director of financial aid. Leigh was a member of the Mount David Society and the College Key at Bates. He was inducted into the Bates College Scholar-Athlete Society in 2012 and received the Bates College Departmental Service Award for 2014-2015.

Leigh was also a longtime member of the Maine Association of Student Financial Aid Administrators and served as its secretary and treasurer. He was awarded the Candance Johnson Vinette Award for Distinguished Service in 2001, and in 2007 Leigh was named a lifetime honorary member — only the third person to receive this honor.

Leigh was awarded the Bates College Helen A. Papaioanou ’49 Distinguished Alumni Service Award in 2016. This was one of Leigh’s finest moments, memorialized online at: tinyurl.com/yx8u5s27.

Leigh was a lifelong fan of basketball and was well known in Maine for his many years as scorekeeper during the Maine high school basketball tournaments. Leigh also served as official scorer for the Bates College men’s basketball team for nearly 50 years. He was inducted into the Maine Basketball Hall of Fame in 2019 as a Legend of the Game, an honor that he cherished greatly.

He is survived by his brother, Terry Campbell and his wife Anne Wright of Belgrade; two nieces, Molly Campbell and Heather Campbell Hess; and several great-nieces.

A celebration of Leigh’s life will be held at a later date.

Memorial contributions may be made to the Campbell Prize Scholarship, c/o Wiscasset High School, 225 Gardiner Road, Wiscasset, ME 04578.