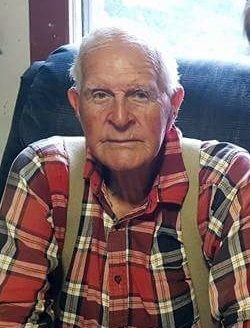 Lemuel M. Miller, 89, of Waldoboro, died peacefully, surrounded by his family, at his home May 30.

Born in Friendship, Feb. 1, 1929, he was the son of Lemuel S. and Vivian Larrabee Miller. He attended Cushing schools and Thomaston High School.

On Feb. 1, 1949, Lem married Geraldine M. Levensaler. The couple made their home in Cushing until moving to their home in Waldoboro in 1960, where he has since resided. Mrs. Miller died in 1993.

Lem was known as a hardworking man all his life. Never able to sit idle, he was always busy, whether digging clams, cutting wood, landscaping, hauling gravel from his gravel pits or plowing snow. For more than 65 years, he operated a rubbish removal service. He continued digging clams and cutting wood right up until last year.

For many years he was an avid hunter.

He was a long-time active member of the Thomaston Congregation Kingdom Hall of Jehovah’s Witnesses. One of his favorite scriptures was John 6:40.

Other than his parents and wife, Lem was predeceased by son, Kendall L. Miller in 1953; and sisters, Gloria Mank and Esther Mank.

Services will be private with burial in Sweetland Cemetery, Waldoboro.

To share a memory or story with Lem’s family, please visit their online Book of Memories at bchfh.com.