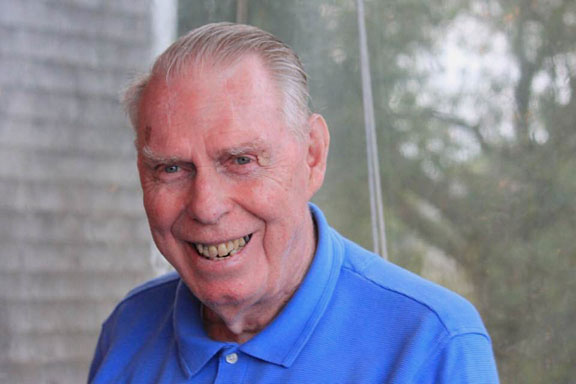 Born in New York, N.Y. to Dorothy C. and Leo A. Marshall, Len grew up in the Bronx. He graduated from All Hollows High School at age 16 and Fordham University at age 20 with a degree in history. Serving in the Army in Korea, he earned several decorations, including the Air Medal with bronze oak leaf clusters and the Purple Heart Medal.

Upon his return, he married Barbara M. McMahon to whom he was married for 58 years until her death in 2011. Len had a long and successful career in the insurance industry. He held leadership roles at Great American Insurance, Reliance Insurance Company, and General Accident. He also served on the Board of Directors for United Fire and Casualty.

Len and Barbara had a busy life raising eight children, and Len was always involved, for example being the starter at most swim meets. He was an avid sportsman and played semi-pro baseball in his youth. He loved tennis and volleyball. A devout Catholic, he was active in his parish. His beloved Pemaquid Point community remained central to his life, and he was an enthusiastic volunteer at the Lighthouse Fisherman’s Museum.