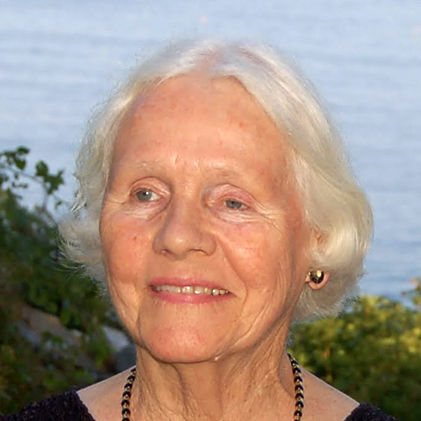 With Linda’s passing, the world has lost a passionate gardener and birdwatcher, a pioneer of recycling, and a champion of the beleaguered adverb. Woe was anyone who used “looks like” in place of “looks as if” within earshot. A tireless and effective volunteer and advocate for her causes, she was also a talented arranger of flowers, a tenacious puller of weeds, and a staunch foe of pollution, smoking, elbows on the table, junk food, and cilantro. Nary a grandchild was ever properly dressed, nor more loved. She was a wonderful mother of three and wife of 65 years to Robert Johnson.

From the time she was a child, Linda and her family spent their summers in South Bristol. When Bob retired, he and Linda built a house there and divided their time between Maine and Cleveland, Ohio. Linda had good friends in both places who could always count on her as a lively conversationalist, helping hand, or tennis partner. Born in 1934 in Belmont, Mass., Linda moved to Cleveland Heights, Ohio, as a young girl. Linda earned a liberal arts degree from Vassar College and married Bob Johnson in Cleveland. There, and in Midcoast Maine, Linda dedicated her considerable energy to environmental causes while expertly raising three children, Stuart, Scott, and Elizabeth. Linda did not abide late sleepers and was, herself, frequently up and out of the house early, driving her children to 6 a.m. figure skating practice or venturing off in drizzly weather to inhospitable bird-watching locations. Today, she would be joining the gang following the Steller’s Sea Eagle with gusto.

Throughout her life, Linda had a boundless love of the natural world, passed down to her from her mother, Betty Greene, late of South Bristol. Birding took Linda to every corner of the U.S. and all over the world, from Maine to Hawaii and from Africa to the Amazon jungle. She led bird and nature walks and passed along her fascination with birds to all who were receptive. Linda also loved gardening and was an active member of garden clubs in Cleveland and Maine, in the course of which she received the Garden Club of America’s Medal of Merit award.

Linda was first and foremost a loving wife, mother, sister and aunt. She was predeceased by her sister, Helen Gurland, of Fort Salonga, N.Y. and will be missed dearly by her husband, Bob; her sister, Elizabeth Welles, of Branford, Conn.; her three children and their spouses, Stuart and Carol Johnson, of Chester, Conn., Scott and Susan Johnson, of Portland, and Chip and Elizabeth Brewer, of Cape Elizabeth; seven grandchildren, Todd Johnson, Eric Johnson, Claire Johnson, Meg Brewer, Tim Brewer, Brad Johnson, and Chris Johnson; along with generations of nieces and nephews. They will remember some of Linda’s happiest moments presiding over boisterous family dinners at the head of the long, Ikebana-adorned table at her home overlooking the Damariscotta River.

No service is currently planned.

In lieu of flowers, gifts may be sent to Coastal Rivers Conservation Trust, P.O. Box 333, Damariscotta, ME 04543 or online at: coastalrivers.org/get-involved/donate.