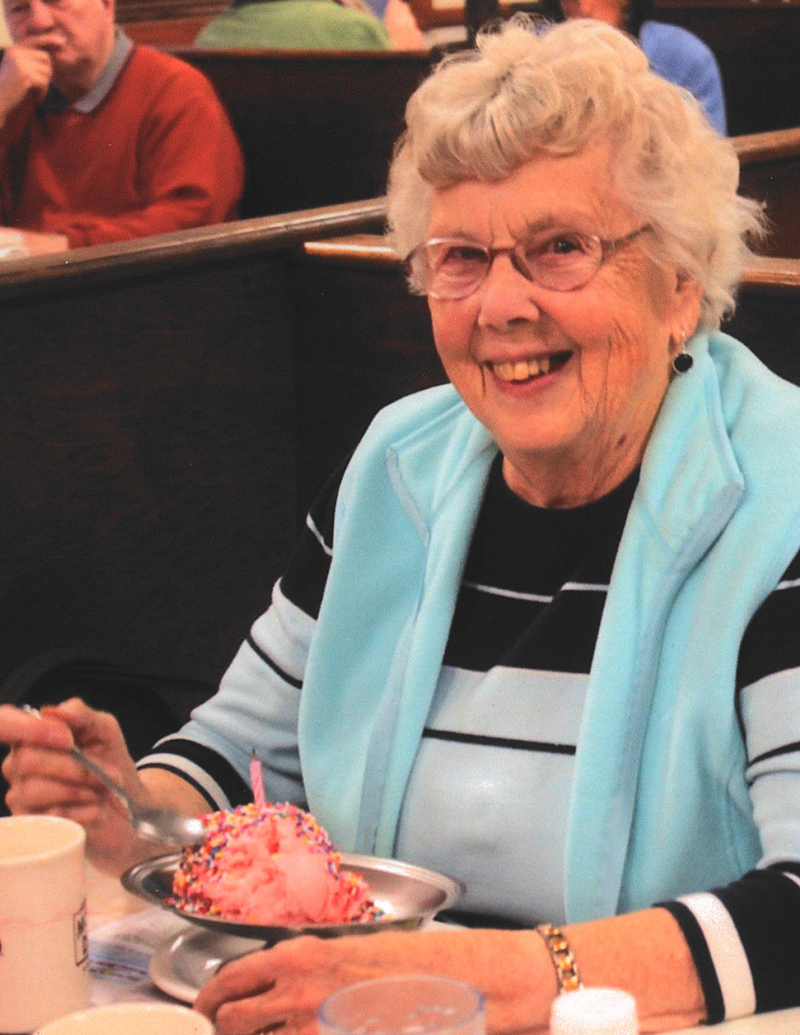 Lois Graffam, of Waldoboro, quietly passed away on Dec. 29, 2021. She was 96 and had recently celebrated Christmas with her family.

Born Nov. 2, 1925, in the “Octagon” house in East Limington to Nancy Doris (Chase) and Carl Boulter. The “Octagon” house, so named after its 8-sided shape, was built under the guidance of her great-grandfather Josiah Chase and his wife Julia. Her grandparents, Frances (Fanny) and Charles Chase occupied the home at the time of Lois’ birth. Lois often proudly told stories of Josiah and his whaling adventures in the South Pacific – sailing from New Bedford, Mass.

After graduating from Limington Academy in 1934 as the class salutatorian where she was a distinguished player on the Warrior basketball team, she met Dennis Calvin Graffam. Lore had it that he was introduced after riding horseback past her. They married on March 18, 1943, in Limington while Dennis was in the Merchant Marine and remained so until his death on April 22, 1997.

While at Limington Academy, one of her math instructors was the late Brainard Paul. Coincidently, two of Lois’ children, Alan and Carleen, were taught math by the same Brainard Paul at Waldoboro High School in the 1960s. Lois and Dennis placed a high value on education and a testament to this is borne out by all of their children attending college.

Between 1944 and 1955, Lois and Dennis had four children while living in various places in Cumberland and York counties. In 1956, they finally anchored down when they purchased a poultry farm in North Waldoboro. In Waldoboro, they spent their remaining years cultivating many close friends. In addition to the ardors of the poultry farm, Lois worked a variety of jobs including at Sylvania Electric and at the convenience store/laundromat they owned on Friendship Street.

In 1968 Lois embarked on a new career at Waldoboro High School and then for many years at Medomak Valley High School as a secretary. She retired in 1988 after working in the guidance department. Never one to sit still after retirement, Lois spent many hours volunteering at the local polling stations and at Miles Memorial Hospital. In addition, she operated her own mobile home skirting business until she was sidelined by her health.

Lois enjoyed reading, solving crosswords, and completing jigsaw puzzles. She loved her gardens and many birds it attracted and she was always happy to see friends, attend Medomak Valley retiree gatherings and watch her sons play and coach basketball. As a Cleveland Indian fan , she drew a lot of teasing from the local Red Sox boosters. In addition to playing basketball in high school, Lois was a state championship caliber candlepin bowler for many years participating in open championships throughout Maine.

She was predeceased by her husband, Dennis, her parents and step-mother, Ruth.

She is survived by her four children, Alan and Susan, Carleen Turkington, Jim and Jo Ann, and Scott and Pat; six grandchildren, Melissa, Mindy, Angela, Matthew, Bailey and Colby; and six great-grandchildren, Caroline, Lydia, Holden, Sullivan, Evans and Shepherd. She is also survived by her sister, Catherine (Tink) Hawkes, of Gorham; and brother Donald Boulter, of Standish.

The Graffam family would like to extend our great thanks and gratitude to Jodie Nickles, Kerrigan Nickles, Lorraine Lash, Brenda Winslow and Joanne Genthner for the wonderful care they provided. Without them it would have been impossible to fulfill Lois’ greatest wish – that she remain in her home.

Please join us for a celebration of life in the spring.