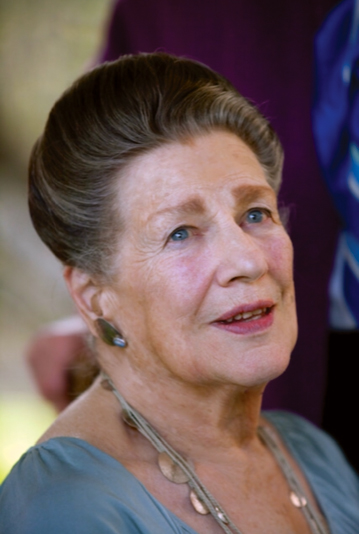 Born in Boston on May 4, 1919, Jerry was the daughter of Harold and Cecil Scheibe. She grew up in Belmont, Mass., spending summers at a cottage on Mere Point, where her life-long love of Maine began at six months when an old aunt gave her clam broth instead of formula.

Jerry’s mother was an active thespian and her father, who headed the Fan Department at Westinghouse, invented the first electric eggbeater. No wonder Jerry could fix anything and shone on stage whether in a play, designing sets or reading her poetry.

Jerry began painting in grade school. She studied art at the University of Leiden, then graduated in 1940 from Oberlin. She met her first husband, Lucien B. Day, at the Cranbrook Academy of Art. During WWII the Days lived in Alexandria, Va. where Lucien worked at the Pentagon and Jerry had a fellowship at the Phillips Gallery, (whose collection today holds five of her paintings) in D.C.

While also starting a family, Jerry volunteered at Walter Reed Hospital working with amputees. At the end of the war, the Days moved north to Craftsbury, Vt. to paint and parent in the wilderness, then later lived in Farmington, Conn. near Lucien’s family.

While raising three children, Jerry continued to paint and her reputation as a fine artist grew. She exhibited her work in galleries and museums across Vermont, Connecticut, and in New York City.

Jerry’s summer adventures continued at the Mere Point Cottage until the day in 1950 when Mrs. Scheibe insisted the children shed their swimsuits out on the porch and rinse their feet before coming in on the “beautiful wood floors.” Soon thereafter Jerry found a 200 year-old tidal mill on a cove up the coast on Westport Island whose floor was “the color of dirt.” From then on her children swam, dug for clams, and freely tracked sand onto the kitchen floor.

After the Days divorced, Jerry moved with her children to Marblehead, Mass. She built a house on Gingerbread Hill overlooking Black Joe’s Pond. One day, a mutual babysitter introduced Jerry to her future husband, Dike Mason, a widower with three children. In 1965 Jerry and Dike moved their blended family to Salem, Mass. They bought the old Dodge Pickering House on Chestnut Street, an enormous Federal mansion with 14 fireplaces that had fallen into disrepair. With love, laughter and hard work, they brought the beautiful house back to life.

While raising her children – now six – Jerry established and ran the art department at the new Pingree School in South Hamilton, designed sets and performed with the Swampscott Theater Company, painted, wrote poetry and was an active member of several community groups. Her six children were amazed at the grace and love with which the two families blended as Jerry opened a whole new world to them, teaching them to love it and make it better.

In the mid 70s, Jerry and Dike bought and renovated the old farmhouse next to the Westport Island mill. When Dike retired in 1978 the Masons moved to Maine full-time. Jerry was active in the mid-coast for 40 years continuing her passion for theater at the Studio Theater in Bath, exhibiting her paintings at galleries all over the state, and ocean sailing with her family.

A consummate hostess, she made everything a party at which there was always room for one more celebrant. She served tea with rum and if adding a bit of cream to a dish tasted good, she’d add a bit more. Elegant, savvy and wise, Jerry was bigger than life, an irrepressible Renaissance woman who will be remembered for her abundant talents and, most importantly, as a loving mother, gram, great-gram, adopted mom and friend to many.

Jerry was predeceased by her beloved Dike; son, Christopher; and son-in-law, Moose.

She is remembered by her children, Felicity (John), Sarah, Tripp (Susan), Tory (Stretch), and Jodie (John); as well as beloved grandchildren; great-grands; her guardian angel, DeDee Hodgdon; the Ladies of the Dirt; and an enormous extended family of “other” daughters and friends.

A memorial service will be held at The Chocolate Church Arts Center, 804 Washington St., Bath, Saturday, June 13 at 2 p.m.

In lieu of flowers, contributions may be made in Jerry’s name (Lois E. Mason) to the Westport Island Fire Department, 6 Fowles Point Road, Westport Island, ME 04578.