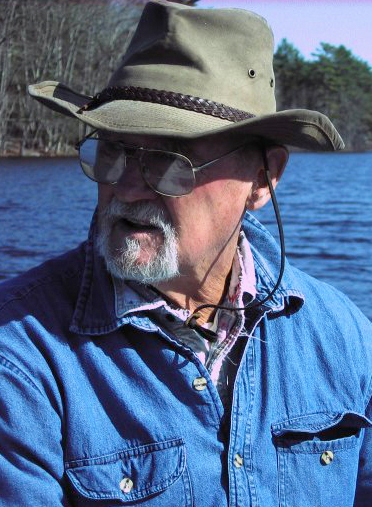 Let it be known that on May 28th, 2017, the greatest fisherman I ever knew cast his last cast. After more than 8 decades of trolling, wading, paddling, fibbing and exaggerations, Loren “Sib” Sibley has spun his last fishing tale. After 82 years of continuous motion he has finally made the last leg of his trip, up to Linda’s camp, where he is now resting peacefully.

Fortunately, Loren left us with some valuable memories, words and ideas that he lived by. Such as:

If you keep your ears open and your mouth shut, you just might learn something today.

Almost anything is better than a sharp stick in the eye.

Throwing away rope of any kind or length is a sin.

If you can’t tie a knot, tie a lot, or better yet carry 50 bungee cords with you at all times.

All coolers at one time or another belonged to him.

Any lure will do as long as it is a weeping willow.

Your best offense is a good defense.

He enjoyed moving things around, mostly just for something to do. His favorite things to move were boats, campers, firewood and small buildings of various sorts.

He loved to mull about, stopping by people’s houses that he knew, often taking their trash to the dump for them. Thus also creating the opportunity for finding new treasures.

He had a fondness for returnables.

He liked the TV volume turned down just loud enough, so that the neighbors could hear it well.

He believed that duct tape and bungee cords could actually repair things.

His favorite store was Good Will, especially on Tuesdays when the new inventory came in.

Unfortunately, the age old questions of “How many campers does Sib actually have and where are they?” may forever remain a mystery. Anyone with one of Sib’s lost campers please call the camper repatriation hotline for assistance with removal.

He really likes golf clubs, and once in a while golf itself.

His fish chowder and homemade baked beans were legendary and Bobby Flay wouldn’t stand a chance against Sib’s famous homestyle fish fry with his hand cut cole slaw on the side.

Sib was generous with his time and energy, helping anyone with a project or chore at the drop of a hat, never waiting for an invitation.

Somewhere in between all of the lakes and rivers that he explored he also managed to touch many lives in this world. Some he touched on the basketball court when he coached varsity basketball at many high schools throughout the state, using his tough love methods to hone the skills of his players.  Many people who knew Sib would remember the rolled up red towel that always accompanied him on game night and was sometimes used to punctuate his disapproval of a bad call or broken play. Other lives were touched by his 30 years as a teacher or the years he spent getting kids safely home on the bus after school.

Sib married Dorothy,the love of his life, in 1974. That event brought together two families for a real life episode of the “Sibley Bunch.” The show ran for 43 seasons, and even though some early seasons didn’t receive very high ratings, it was never cancelled and went on to become a smash hit.

I guess in the world at large this man won’t be found in any history books or rank as the “most influential man” of any century, but Loren B. Sibley was probably the greatest man that many people in this part of the world actually ever knew personally, or had the good fortune to share a meal or a canoe with. His stories and adventures will be the kind of history that is shared around campfires and as bedtime stories told to young children to give them courage to face the dark of night. The tales will become more harrowing and the fish will continue to grow in size with each new campfire and with each passing year. Because this is exactly the way that legends are made, you start with a person of unique character, you mix in all of the love, affection and admiration of those who knew him and then serve it warm, in the form of a story. May this wonderful legend live on in our hearts, words and fireside tales for many generations to come.

And remember boys, “Keep your hair off the collar, off the ears and above the brow”, or you’ll be riding the bench.

He is survived by his loving wife of 43 years, Dorothy Sibley; sons, Jay Sibley and wife Sherba of Edgecomb, and David Sibley of Dresden; daughters, Sherry Andrews of Hibbing Minnesota, and Lori Sibley of Wiscasset; stepdaughter, Kim Gillespie and husband Lee of Dresden; stepsons, Chip Huber and companion Melissa of Wiscasset, and Scott Huber and wife Tammy of Dresden; brothers, Bob Sibley of Carmel, and Galen Sibley of Vanceboro; as well as 19 grandchildren and 16 great grandchildren.

A celebration of Loren’s life will be held on Sunday, July 16th at the Duck Puddle Campground, 60 Campground Rd., Nobleboro, Maine between the hours of 1-4 pm, all are invited to come.

In lieu of flowers, a onetime scholarship fund has been set in Loren’s name at Wiscasset High School. The scholarship will be awarded to a student who will be entering into the teaching field and attending his alma mater The University of Maine at Orono. Those desiring to contribute can mail a check to: Wiscasset High School, Attn. Scholarship Fund Loren B. Sibley, 272 Gardiner Rd., Wiscasset ME 04578. Or email bsmith@wiscassetschools.org for more information.

Arrangements are under the direction and care of the Strong-Hancock Funeral Home, 612 Main Street, Damariscotta, ME 04543.  Service details can be found, and condolences and messages for his family may be expressed, by visiting: www.StrongHancock.com.