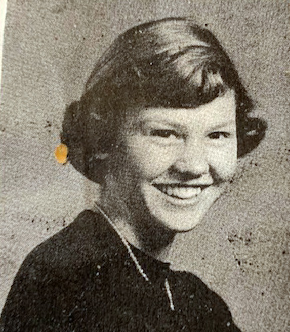 Margaret Nan Justice was born in Niagara Falls, N.Y. on April 2, 1938 and attended Bethany College in Lindsborg, Kan., where she met her husband and lifelong love, William Hammer.

Nan moved with her family to New England in the mid-1960s, settling in Maine in 1978. She was an accomplished artist and was politically active in the early anti-nuclear movement in both New Hampshire and Maine.

Nan started the tennis team at Lincoln Academy in the early 1980s, coaching both the boys and girls teams to state championships numerous times, retiring after 16 years. She was later inducted into Lincoln Academy’s hall of fame.

Nan lived a full and passionate life, devoted to her husband, Bill, for almost 65 years of marriage, and passed away on Feb. 1, 2021 after living many years with Alzheimer’s.

Nan is survived by her husband, William Hammer; children, Thomas Hammer, Lisa Hammer, and Michael Hammer; and seven grandchildren. She was predeceased by her granddaughter, Phoebe Sternbach.